Happy 2020 to you all. I’ve heard it referred to as the Roaring 20’s and I called it the year of perfect vision today. Hoping that each of us is inspired to look with clarity and see what needs to be seen, so we can do what needs to be done.

Book Review
I must tell you about a book I just read by an author who is growing in my esteem with every story and book I read of hers: the fabulous and talented Cage Dunn.

I just finished reading Purpose: A Journey of Short Stories, which is an e-book that I downloaded from Smashwords.

Humans are not at the top of the food chain in these terrifying sci fi alien invasion tales. Each one is chilling in its own way. These are stories you will not soon forget.

It must also be said that, even while humans in the stories are doing what humans do best, trying to survive against all odds, the protagonists do not lose their humanity. They may be quarry but they are still human.

Nature
It was a beautiful sunny day here, even though the roads were hazardous with thick sheets of ice in many/most places, depending on the location and traffic volume, from the number-of-inches that fell yesterday and the night before. I wanted to walk out by the big lake so first drove out along it then headed to a wonderful channel that leads between Lake MI and White Lake, which also has a lighthouse. The road leading out there is narrow and somewhat hilly. In one place, I had to back up into another parking lot to let someone leaving the lighthouse parking get past. The cement ramp with sturdy metal pole guardrails was hazardous with thick ice but I was able to pick my way down to the channel walk that leads to Lake MI at one end. There were a few people ahead of me, picking along the dry spots melted by the sun, holding on to the rail. I went slowly, but when I saw a full-grown older man fall down, I said that’s far enough. I took a video from where I stopped and did a 360 before heading back to the car. It was a nice drive and short walk. The sunshine and fresh air, hovering around freezing, was invigorating.

First stops were at Lake MI.

Here you can see frozen tree roots on the tree.  How it can survive there is a mystery.

This is a good shot of the whitecaps on the water.  The wind is fast and brisk!

This is the 360 from where I’m standing.

Channel wall, looking into the water. 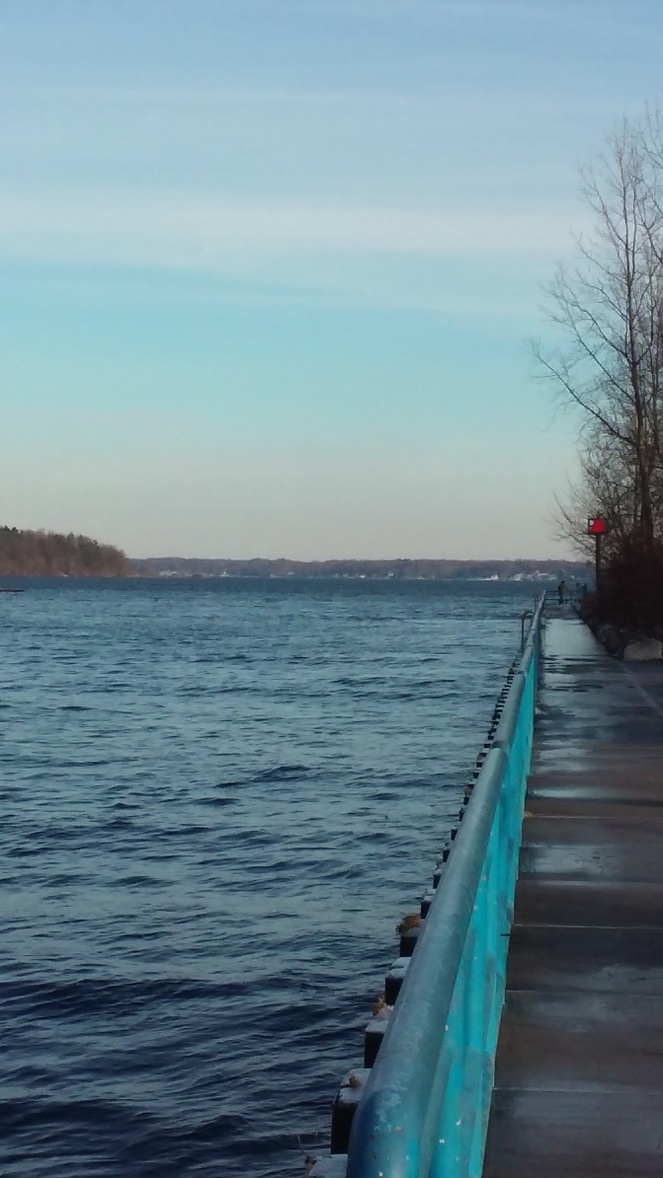 Big rocks that are used to stabilize the dunes along the path.  It deters humans from walking on the sand, at least until you get out to the lake.

Music
A song heard on pandora today is by the talented Canadian group, Blue Rodeo.

Five Days in July is the fifth studio album by Canadian country-rock band Blue Rodeo. It was released by WEA on October 26, 1993 in Canada and Discovery Records on September 27, 1994 in the United States. The band’s most commercially successful album, it has been certified six times platinum as of 2008.

The album was recorded on singer/guitarist Greg Keelor’s farm in Southern Ontario in July 1993. While the band originally intended for the recordings to serve only as demos, they found that the songs had a warmth and spontaneity that warranted releasing the collection as an album. Guest musicians on the album include Sarah McLachlan, Colin Linden and Anne Bourne. This album was keyboardist James Gray’s first album with the band. It is supposed to be a tribute to the Harvest-era Neil Young sound.

“Head Over Heels” was released in 1995 as the sixth single from the album. It peaked at number 4 on the RPM Country Tracks chart and number 16 on the RPM Adult Contemporary Tracks chart in May 1995. It was reached the top 40 on the RPM Top Singles chart.