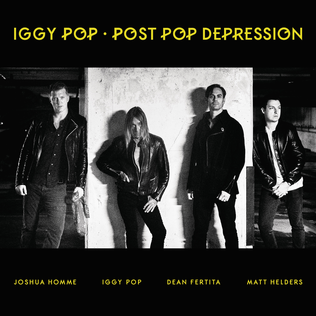 [Post Pop Depression] discuss[es] issues of what happens when your utility is at an end, and dealing with your legacy. – Iggy Pop

Hello everyone. It is a real honor and pleasure to be invited to Hans’ song draft. Being a person who likes patterns and order, I was trying to figure out how to choose the songs – and finally gave up. It’s a no-pressure draft, so why not just choose what I love to hear, regardless of where it falls in musical history chronologically, by genre, artist, political significance, etc.

Now that you know where I’m coming from on it, I present my first choice. From what I read in wikipedia, the origin story of the album from which, “Gardenia,” comes from starts where Iggy contacts Josh with ideas that stemmed from the time Iggy worked with David Bowie.

I first became aware of Iggy Pop, Josh Homme, Dean Fertita (Queens of the Stone Age,) and Matt Helder’s (Arctic Monkeys,) Post Pop Depression at J’s Wax Ecstatic blog. See J’s post here. I was hooked after reading the review and listening to the samples, then bought the album. You know how it is when a sound clicks into place and you need to listen again and again? The whole album was like that for me which meant it stayed on the platter for several weeks. You also know how certain tracks will jump out at you from an album, and that jumping track can change over time. “Gardenia” remains at the top of the heap for me with “Paraguay” a close second or maybe tied.

What is it about, “Gardenia”? Let’s start with the sound. The wah-wah intro in duet with dissonant guitar notes, the throbbing heartbeat of the bass, and the minimal-though-pointed tap of the drums set the tone. Even though the title suggests that of a flower or a female, the notes proclaim that this is no ordinary love song. Iggy’s yearnful searching voice gives the feel of a junky looking for their next fix. Homme’s haunting falsetto is like a shadow following the searcher. The bridge has ambulance urgency to it as all is revealed. Iggy’s self-punishing tone in the last verse is surprisingly more brutal and honest than the rest of the song which is not an easy feat to accomplish.

The lyrics are as brilliant as the music. The singer is searching for the object of his darkest desires where he usually finds her, out walking the streets in the seedy part of town.

As if that wasn’t enough,

What kind of woman is this Gardenia?

The searcher recalls a time with his lady of dark passion, describing the big reveal when the lights were turned on afterwards. The reveal is ambiguous. Is it a matter of gender? A matter of habit/addiction? Maybe both? It never says, which is one of the most brilliant parts of the lyrics.

He (are we even sure it is a he?) doesn’t find Gardenia that night. Instead, he goes back to his “cheapo motel by the highway to hell” and in my mind I imagine him staring at himself in the mirror as he berates himself.  The regret is palpable as he cries out with such resignation:

You could be burned at the stake
For all your mistakes,

Couldn’t we all. This is perhaps the most telling line in the song.

One other thing I love about how Iggy sings this is when he tacks repeats onto some of the lines.

Is this song really about Gardenia at all?

It’s a musical and poetic masterpiece in my opinion. Songwriting credits go to Iggy Pop and Josh Homme, as far as I know.  (The print on the CD is so light in areas I can’t read it.) Josh Homme produced the album. It was nominated for a Grammy in 2016 but lost out to David Bowie’s Dark Star.

One more thing I MUST say about the song: it’s a full-blown serious earworm!