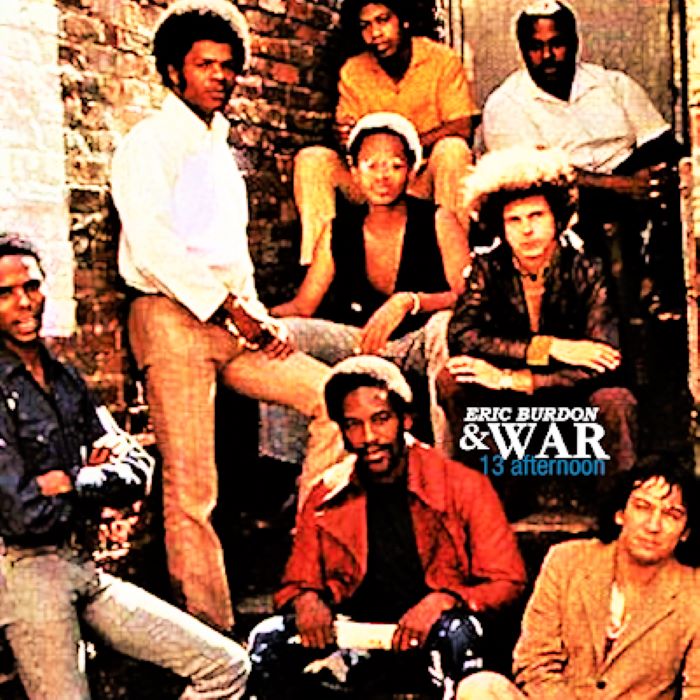 I don’t remember the first time I heard, “Spill the Wine,” but I do remember being mesmerized by it. Flutist Charles Miller feels like the Pied Piper* as the protagonist is led to an altered reality as he decides to lay down in the grass on that hot summer day. I love how sounds and reality begin to bend and how magical and exotic that reality is. At my pre-teen age, I had no care nor concept that there might be symbolism in the words, only that it was like a fairy tale with music.

Released in May, 1970, “Spill the Wine,” by Eric Burdon and War, first appeared on the album Eric Burdon Declares War.

Cover art trivia:
The cover, credited to The Visual Thing (with Burdon credited for the concept), depicts two disembodied but joined arms, one white and one black, both giving a three finger salute, similar to the peace sign which uses two fingers. The three fingers may represent the letter “w” in the word “war”. This salute was also used on the cover of a future album, War. The use of a background sun also appears as a recurring theme on both front and back covers of The Black-Man’s Burdon and the inner sleeve of Deliver the Word.

Harold Brown, who was  … a founding member of War, … [said] that record executive Steve Gold arranged for War and Eric Burdon to record together. Says Brown:

Steve wanted first to see what we could do. So for about a year we just kept going in and out of studios. And then one day we were up in San Francisco, just playing and stuff. Lonnie (Jordan, War keyboard player) came in acting all drunk and stuff and out. They had a bottle of wine, and some of that wine got spilled in the console. Lee (Oskar, War harmonica player) says he felt that the song didn’t have anything to do with the wine going into the console, but all I know is after that they moved out of the A studio, they moved us into the B studio, and then we were playing a Latin thing, and even if Eric had been writing ‘Spill The Wine’ all along, and writing the concepts, that’s when it all came together. I think that Eric was already working on an idea about leaking gnomes waking up in a grassy field, and then when the wine inadvertently got knocked over, whether it was part of the song or not, it all just came together right at that moment.

Lisa Shea at The Wine Intro website has an interesting theory about the song’s lyrics:

Unfortunately for us wine drinkers, the lyrics actually have nothing to do with wine (or girls for that matter). The pearl referred to the pearl of the orient, i.e. heroin. Spilling the wine was a slang term for the blood that dripped when you were doing the drugs.

Whatever hidden meanings any of the terms in the song might or might not have, there is no denying that this is a good jam.  I’m including live and studio versions of the song:

But there I was
I was taken to a place
The Hall of the Mountain King
I stood high up on a mountaintop
Naked to the world
In front of
Every kind of girl
There was long ones, tall ones, short ones, brown ones
Black ones, round ones, big ones
Crazy ones

I could feel hot flames of fire roaring at my back
As she disappeared
But soon she returned
In her hand was a bottle of wine
In the other, a glass
She poured some of the wine from the bottle into the glass
And raised it to her lips
And just before she drunk it
She said

*Interestingly when I went to look for links for the Pied Piper, I came across a more sinister aspect on the story that I had never heard before.  Because it’s Halloween time, read more about it here — if you dare!  If you believe the song is talking about heroin, the parallels between it and the piper are chilling!

I hope you have enjoyed today’s post.  Looking forward to reading the comments on this one.