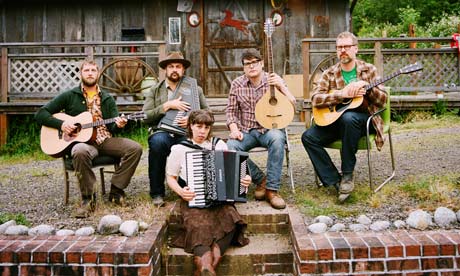 Since Spotify has stopped working with the bluetooth in the car through my phone, I have started listening to CDs again. The Decemberists’, “The King is Dead” is one hell of a good album as I’m being reminded. What thrills me about it is the voice of Colin Meloy. His voice is truly heavenly. It’s clear, it is well-modulated, and it flows into my ear like warm honey. Not only that, Colin wrote every song on it. In the song being highlighted from the album today, the steel guitar played by Chris Funk is featured. Chris knows his steel guitar and how to make it wail just right. Gillian Welch sings backup vocals on, “Rise to Me.”

Wikipedia says: The King Is Dead is the sixth studio album by The Decemberists, released on Capitol Records on January 14, 2011. Described as the “most pastoral, rustic record they’ve ever made” by Douglas Wolk of Rolling Stone, the album reached No. 1 on the U.S. Billboard 200 chart for the week ending February 5, 2011. The song “This Is Why We Fight” reached number 19 on the U.S Alternative Songs Chart, while the song “Down by the Water” also charted in the United States.

The King Is Dead was recorded during spring 2010, with most of it being made in a six-week period in a barn at an 80-acre … site called Pendarvis Farm, near Portland, Oregon. It has been speculated that the album title is an homage to The Smiths’ 1986 album The Queen Is Dead, largely due to Colin Meloy’s long-touted influence from the band. It was co-produced by Tucker Martine. Meloy has said that a primary musical influence for much of The King Is Dead is R.E.M., and three songs, “Don’t Carry It All”, “Calamity Song” and “Down by the Water”, feature the R.E.M. guitarist Peter Buck. The King Is Dead has been called the “most pastoral, rustic record they’ve ever made” by Douglas Wolk of Rolling Stone. On January 26, 2011, it became their first No. 1 album on the U.S. album chart.

My darling, my sweetheart,
I am in your sway,
two cold climbs, come spring time
so let me hear you say, my love
I am gonna stand my ground,