This is one I wrote a year or two ago, for one of Rory’s challenges.  I found it during the ongoing file management and thought to share it.  Beware it’s more than a little spicy! 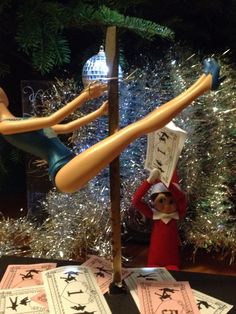 New Years Eve: Elves and Vices
‘Twas the night before New Year and all through da club
Every creature was snorting to house tunes by Dub.
Us Imps we were hung and we hoped to get laid
We’d worked Christmas overtime and’d just gotten paid.

When out on the floor there arose such a clatter
I sprang from my ho to see what was the matter
Away to middle I flew like a flash,
Hand on my 9mm, ready to blast

The mirrorball on the breasts of the pole dancers showed
Who was punching, who was packing, who was ready to glow
When what to my wondering eyes should appear
But an Elf in red leather and holding a beer

My boss, a fat bast*rd so lively and quick
Musta slipped Ms. a rufe, I’ll be damned, ’twas St. Nick
More fly than Rick James, his dancing was hardy
And he whistled and shouted and yelled, “Start this party!”

As Dub cranked the jams, Santa and us Imps got cranking,
Glugging whisky and brandy got us ready for spanking
We and the ladies all thumped to the jams
Hootin’ and hollerin’ in the throng of our fans

And then in a twinkling, I heard by the door
The Po-Po were raiding, they cleared the floor
When they saw it was Santa they said never mind
They began to party with St. Nick and were soon doing fine

When midnight approached we each grabbed a hottie
Santa got first pick, Lana, with the best body.
As the clock struck 12 champagne overflowed
As we drank and we kissed, on wasted overload

We sloshed and we tongued til 12th ding of the clock
The nortiest partiers on da whole block
At the end of the night, when ’twas time to go
‘Ta sprang to his limo and left the show

I heard him exclaim, “Happy New Year to All
Make adventure your goal and you’ll have a ball!”