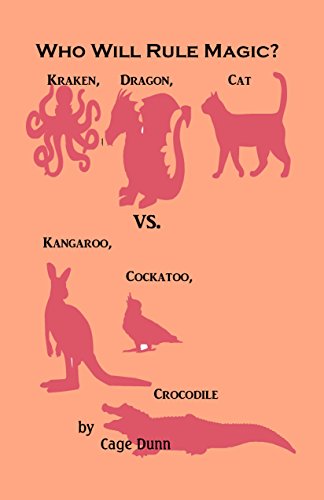 We come into the tale just as an annual (animal) world Council of Magic is about to take place, where it soon becomes apparent that Cat is going to attempt a coup to become the sole overlord of magic over all. Of course there are some of the assembled who are going to do their best to stop Cat. The protagonist is from the air, a cockatoo named Cocky. His Australian comrades from the other two elements of water and land are a crocodile, Croc and Roo, a kangaroo. Others assembled who will do their vital parts in this endeavor are Dove, Owl, and Emu. There also are those in the mix who may or may not be allies. It becomes a race against the most wicked villain, Cat, and they don’t have much time.

The setting for, “Who Will Rule Magic?…” is Australia, but the adventurers do travel to other places in their quest. There is a nautical section for those who are into sailing.

The story flips back and forth between Cocky, Croc, and Roo trying to fulfill the quest that will hopefully stop Cat and the Council assemblage, where Cat is doing his level best to make himself Supreme Ruler of Magic. There is a lot of finessing there with laws, by-laws, rules, how to get around them, how to sustain them, etc. which were very interesting in a way that anyone who has experience with or is interested in the machinations of a governing body would find interesting.

Throughout the book is a continuing thread of environmentalism which talks about human’s effect on the planet and how it affects all of the creatures. The magical elements here are mostly focused on how animals are able to successfully navigate, procreate, and survive under the duress of a compromised planet.

What is most delightful about “Who Will Rule Magic?…” is the protagonist, Cocky. He’s got a tall order ahead of him: saving the Earth. His two companions are not, at first appearance, very well-equipped to assist him. Croc is a female who is heavy with her eggs and needs to worry about getting them laid in the proper place. Roo is a rather obnoxious egotist who likes to complain. Cocky rolls with it and keeps a level head at all times and puts it to good use. His insider at the assemblage, Dove, is equally important in the success of the mission and needs to step up with her inner courage to keep the dastardly Cat from victory and the world from doom.

I thoroughly enjoyed this story, which took me out of my comfort zone but was well worth sticking with it. The book is a refreshing change of pace in genre combinations.