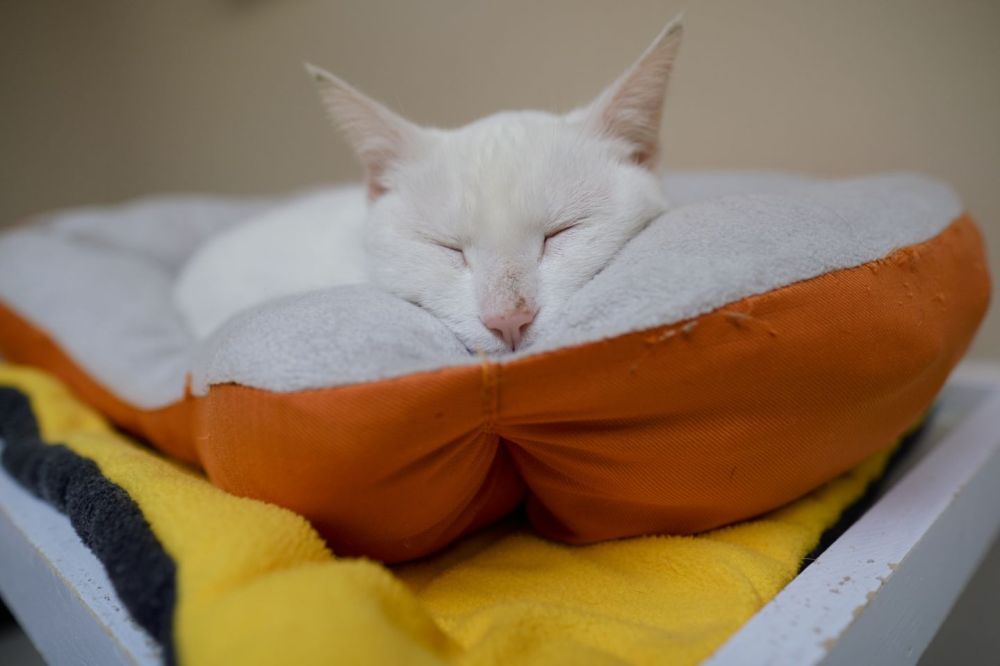 This is the “little angel,” asleep.

Fandango’s FOWC is forlorn, and the Word of the Day Challenge is yelp.

I am an official volunteer at the cat shelter now, with the code to the door and everything. There were a lot of people working this afternoon, more than ever seen. There were also a lot more newbie cats in the units.

The newbies’ reactions to being confined with dozens of other cats varies when they first get there. Some roll with it. Some are recovering from medical procedures they had to have from the horrific things that happen to them from living on the streets and so are a little out of it. I saw two cats today where a limb had to be removed. What’s weird is how easily they are able to get around with a missing arm or leg. Maybe more slowly, and maybe it takes more concentration to leap onto things, but cats are natural athletes. Some newbies are terrified and climb to the most out of reach spaces they can find on the runways and peek out over the cat beds. Some are very defensive and hiss at any cat that tries to approach them. Some are desperate for attention and cling to any human who picks them up and then don’t want to let go.

Some of the reactions are a little more noteworthy than others, but they still are within the realm of normal behavior when adjusting to a new environment or new circumstances.

What is more concerning are the cats that have been there for years for one reason or another and have gotten forlorn – or worse. My son and his wife have been volunteering there for years and so they have gotten to know the oldtimers very well. Since I’ve been thinking about fostering a cat or adopting one, they suggested a cat who has been there for 8 years. EIGHT YEARS. The cat has no diseases or medical issues. She is, however, extremely shy and runs to be out of sight much of the time when humans are around. I met her for the first time tonight. She was asleep in a cubby. I was assured if I reached in she wouldn’t freak and run or scratch, bite, etc. I petted her, rubbed her head, talked baby talk to her, all of the usual tricks to get a response. Zip, zero, nada, inert ball of fur. Her eyes remained closed. I got my face down close to her in the cubby and talked as soothing as I could. Her eyes opened a bare slit; eye contact was made. It’s a start.

There is another cat I need to talk about that truly has become schizoid in her time there (or maybe was before and continues to be?) She is pure white, which is often a sign of issues, but then she is completely deaf as well. She has to be approached in a way where she isn’t startled. Even if she sees you, you never know how she will respond to you. She’s gone from winding around my ankles begging to be petted, to hiding behind a swinging window screen and growling and “yelping” (really, it’s yowling but the word of the day is yelping, so…) as I tried to move the screen to clean the window ledge with anti-fungal spray. Tonight, the person who was filling water and food dishes made a big mistake in opening the food bin while she was nearby. She immediately jumped half into the bin and was munching on food. When the person tried to pull her away, she snarled and tried to bite her! I grabbed a container of the tasty cat treats on the table and started shaking it near her, hoping she would be enticed. She kept right on eating from the bin – but lots of the other cats swarmed me when they heard it. This meant I had to pass out treats to each one at my feet, and then I saw the shy ones here and there in their safe spaces and walked around and gave them each a few treats as well. We still had to find a way to get that little monster out of the bin. One of the veteran lady workers there walked up and just grabbed her by the scruff of the neck and pulled her up and out. The cat twisted and turned and tried to bite but missed. She jumped over onto the kitty litter bin next to the food bin. Another cat jumped on top of the food bin and the two started a hissing match. I grabbed a water spray bottle, which they say use to break up any fights, and squirted a few bits right in front of her paws. She looked at me like how dare I then she ran over and sat on a chair by me and so I grabbed the treat jar and gave her a few treats. She’s going to be a hard nut to crack.