I messed the eyes up on this cool owl, but I’m posting it anyway! 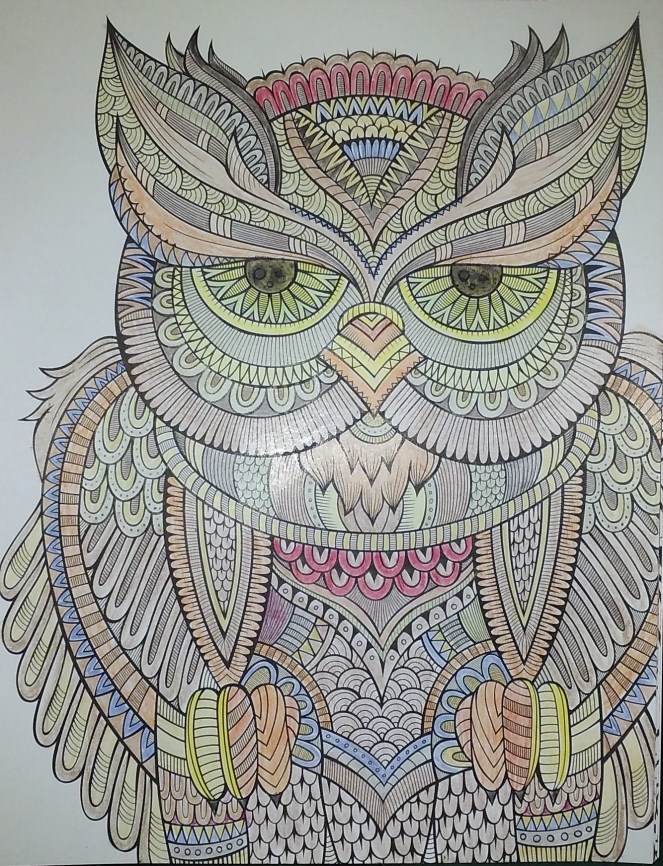 Mack Daddy is the third album by Sir Mix-a-Lot, aka Anthony L. Ray. It was released on February 4, 1992, on Def American Recordings.  “Mack Daddy” has probably Mix’ best known song on it, Baby Got Back.  I just watched a youtube of Mix being interviewed where he said he’s made ONE HUNDRED MILLION DOLLARS just on that song.  Unreal!

The song I chose from the CD, which I’ve listened to many times, mostly when it first came out, is the first track on the CD, called, “One Times Got No Case.”  I was amazed to learn tonight that Stevie Wonder co-wrote it with Mix.  “One Times Got No Case” is about police harassment, plain and simple.  Here it is, close to 30 years later.  Have things really changed much since this video was made?

What you pullin’ me over fo’ mistuh offi-suh?
I’ll be askin’ the questions Leroy.
My name ain’t Leroy, man.
Heh, all right Jerome, outta the car.
Man, why I gotta be Jerome man? Why can’t I be Tommy or Philbert or something?
Just put your hands on the hood Muhammed

It’s the man that you love to hate
Coming outta Washington state
Cops don’t like my profile
‘Cause Mixalot kicks much style
So the man is on my trail
He want to take Mix to jail
If he does, I’ll make the bail
‘Cause I know a lot of rich females
I’m shakin’ ’em just like this
Keepin’ that Porsche in fifth
King County cops don’t quit
Even when a young brothers legit
So they follow me wherever I go
I hear ’em on the radio
With a scanner that I bought from the sto’
‘Cause a brother like Mix gotta know
I’m checkin’ them cops with radar
They don’t believe I’m a rap star
That my brain is up to par
An I’m ready when they follow my car
I know they want to spray me with mace
‘Cause my trunk keeps pumpin’ much bass
But they best get outta my face
‘Cause one-times got no case, give it to me

The police think I’m movin’ them keys
They trip cause I clock much D
They pull a gat an’ they yell out “Freeze!”
I’m whippin’ out my I.D.
My gat sits under my seat
The cops throw me out in the street
They found my gun like thieves
Officer Friendly has got a new beat
So I show him my gun permit
I told him I roll legit
Give me a test to see if I’m drinkin’
They claim my breath was stinkin’
They had me walk on the line
I walked backwards stopped on a dime
My female just reclines
‘Cause she knows I know the time
I’m hip to the cop procedure
They get ya every time they see ya
They stop ya, they cuff ya
They roll ya an’ they rough ya
They ask what I do for a livin’
Should this information be givin’?
This is what keeps me driven
Some cops want a brother in prison
So I got me a few attorneys
Just in case a cop want to burn me
They protect me from the state
‘Cause one-time’s got no case, break it on down

A cop asks me “What’s my name, and don’t lie”
And I’m askin’ officer “Why?
Why ya want to mess with a brother like Mix
When you know I’m livin’ legit?”
The cop said “Don’t get smart.
I tear soul-brother apart”
I said “Well take off your gun, if you want to get done
An’ I’ll show you that I ain’t the one”
The cop rolled up his fist
Puts the handcuffs on my wrists
Then he threw a straight jab and he missed
A female cop pulls up and she’s pissed
But this cop had K-9
A soul sister, yes she’s fine
I said “Won’t ya help a brother outta bind?”
But that badge was going to her mind
So she stuck a billy club in my back
She said “Don’t think because you’re black
That I won’t beat you”, crack, “hit you with the gat”
Her partner starts to laugh

So they took me on down to the jail
P.L.B. came to pay my bail
Then we called Goldstein and Claire
Them’s my lawyers
Walkin’ up the stairs
To the courtroom dressed in suits
‘Bout to give a couple cops the boot
So the female cop takes the stand
Took her oath with the wrong damn hand
My lawyers ate her up like catfish
The other cop pleads the fifth
She lost her job
I seen a few tears on her face
Sorry baby, one-time’s got no case