From Isiopolis
In ancient Egyptian art, the cobra is most often represented as the uraeus, the fiercely protective serpent seen guarding the foreheads of Deities, kings, and queens. As the uraeus, the cobra is a positive presence, a symbol of the power and protection of the Deities. Uraeus is a Latinized version of the Greek word ouriaos, which is itself a version of the Egyptian word uraiet, which indicates the rearing, coiled cobra. The root word has to do with rising up or ascending, so that uriet, a feminine word, can be interpreted as She Who Rears/Rises Up. The root word is also used to refer to the upward licking of flames. And indeed, the uraeus is often depicted spitting fire. This serpent fire represents both magical fire and the burning pain of the serpent’s venom.

Although both Egyptian Goddesses and Gods wear cobras as part of their headdresses, mainly (but not exclusively) Goddesses have a cobra form. Cobra Goddesses are numerous in Egypt. The most prominent is Wadjet, the Green One. She is the tutelary Deity of Lower Egypt and one of the Two Ladies Who represent the Two Lands of Egypt. The Harvest Goddess, Renenutet, is a Cobra Goddess, as is Meretseger, She Who Loves Silence, the Goddess Who presided over the Theban necropolis.

From wikipedia
The Uraeus… [is] used as a symbol of sovereignty, royalty, deity and divine authority in ancient Egypt.

The Uraeus is a symbol for the goddess Wadjet. She was one of the earliest Egyptian deities and was often depicted as a cobra, as she is the serpent goddess. The center of her cult was in Per-Wadjet, later called Buto by the Greeks. She became the patroness of the Nile Delta and the protector of all of Lower Egypt. The pharaohs wore the uraeus as a head ornament: either with the body of Wadjet atop the head, or as a crown encircling the head; this indicated Wadjet’s protection and reinforced the pharaoh’s claim over the land. In whatever manner that the Uraeus was displayed upon the pharaoh’s head, it was, in effect, part of the pharaoh’s crown. The pharaoh was recognized only by wearing the Uraeus, which conveyed legitimacy to the ruler. There is evidence for this tradition even in the Old Kingdom during the third millennium BCE. Several goddesses associated with or being considered aspects of Wadjet are depicted wearing the uraeus as well. 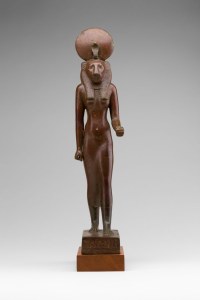 At the time of the unification of Egypt, the image of Nekhbet, the goddess who was represented as a white vulture and held the same position as the patron of Upper Egypt, joined the image of Wadjet on the Uraeus that would encircle the crown of the pharaohs who ruled the unified Egypt. The importance of their separate cults kept them from becoming merged as with so many Egyptian deities.

Together, they were known as the nebty or The Two Ladies, who became the joint protectors and patrons of the unified Egypt.

The Two Ladies with The Eye of Horus

As the Uraeus was seen as a royal symbol, the deities Horus and Set were also depicted wearing the symbol on their crowns. In early ancient Egyptian mythology, Horus would have been the name given to any king as part of the many titles taken, being identified as the son of the goddess Isis. According to the later mythology of Re, the first Uraeus was said to have been created by the goddess Isis, who formed it from the dust of the earth and the spittle of the then-current sun deity.  In this version of the mythology, the Uraeus was the instrument with which Isis gained the throne of Egypt for Osiris. Isis is associated with and may be considered an aspect of Wadjet.

As a fiery and protective Goddess, Isis also takes the form of a cobra. Sometimes She is the Eye of Re, the cobra-formed, solar power of the God. Sometimes She and Nephthys are shown as two cobras and replace Wadjet and Nekhebet as the Two Ladies of Egypt. Sometimes She is Isis-Thermuthis, a Hellenized form of Isis-Renenutet, the cobra harvest protector.

Besides the Uraeus being used as an ornament for statuary or as an adornment on the pharaoh, it also was used for jewellery and in amulets. However, another important use is as the hieroglyph. In fact, the cobra hieroglyph was often used as a determinative when writing the names of Goddesses or priestesses; and showing a cobra within a small enclosure could indicate the shrine of a Goddess.