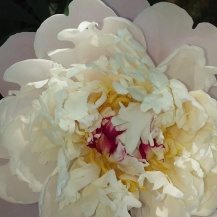 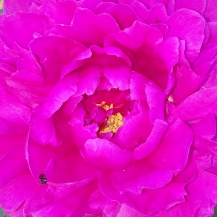 Merril is the host of dVerse today. Merril says:
So today, I want you to conjure the magic of nature in your haibun. Think about the words, too, as of course, you do in poetry anyway.

With the almost-daily rains, every herbaceous being grows lush with green. Where the bearded iris have two blossoms other years, this year there were four or more on each stalk. The peonies took longer to blossom, but the buds were more numerous and grew rotund and tight before bursting into bright pinks and frosted pinks, side by side. Even the cut willow pieces from the fallen limb sprouted and hoped to reach soil to continue.

With so much water and herbiage, faunal forms are burgeoning also. From the sounds of the peepers earlier and now the bullfrogs, there is a plethora of procreation going on. The mosquitos fly in clouds and are ravenous, but they feed so many others I don’t begrudge their snacking on me once in awhile if they are quick and are not seen. Parent birds are starting to bring their fledglings to the feeders, with their plaintive cries if mom or pop doesn’t hop-to with the morsels.

Along with the welcome flora and fauna are the unwelcome – like poison ivy. Every year it continues to encroach into “my” space. I went to pull some last week, wearing gloves. I put it into a 5-gallon pail to die. Three days later, where even the slightest touch of its leaves on my skin, is blisters. As I walked down the back hall this week and looked out of the window, a tendril is growing tall and keeping an eye on me, and waiting for me to come out and play again.

Video of peonies in the yard: