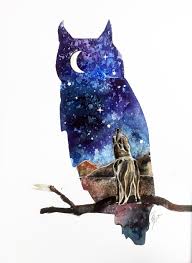 The Wolf Clan had been friends with the Loon Family for as long as the sun and the moon decided to share the sky. The loon followed the sun as God and the wolves followed the moon as Goddess, but there was no conflict as these two groups also decided to share the earth with each other. Loons swam in the day and caught their fish, while wolves hunted rabbits, mice, and the very old, the very young, and the weak among the larger mammals in the night hours. As dawn crept and as sunset fell, the wolves and the loons often passed, nodding in peace in mutual respect.

The humans at this time were hunter-gatherers. The wily opportunistic nomads had also been tricky enough to lure some of the less cautious and more curious of the Wolf Clan to the fireside in the depths of winter. These “tame wolves” were outcasts from the Clan, and whenever possible, were killed by the Clan as traitors. The tamed ones were careful not to wander too far from the humans or the fires, as they knew the fate that awaited them for abandoning their Clan. Most stayed safe, but once in awhile one would grow careless and serve as a meal to the wolf pups, who were instructed by their parents as to why they were eating their own kind.

Being close to the humans meant being close to diseases they had never been exposed to before. Sometimes the tamed ones would get sick and begin to foam at the mouth. They would then wander away, crazed, and die an agonizing death. It was one of the sick tamed ones who was disoriented and not quite dying that was caught and killed by three Wolf Clan members. The carcass was dragged to the den of Muk-La and her mate Wun-La, to feed their pups. This is how the plague in Wolf Clan began.

After thirty wolves got the death-that-came-from-humans, Isis, the leader of Wolf Clan, knew that this could wipe out all wolves in the region if it wasn’t stopped. She climbed to the tallest hill that night and howled to Goddess Luna for help. An owl, also great friends with the Wolves and Loons, alighted in a nearby tree and said, “Goddess Luna sent me. She said the Loon Family can help you with your need.”

When dawn broke, Isis went to the edge of the great Walla Walla Lake and called for the Prince of Loons, Prince Bowie. Prince Bowie was the heir apparent, but he was in no hurry to be king. Loons lived hundreds of years, and princes had many luxuries with few duties. Prince Bowie swam up to Isis and said, “You called?”

Isis explained to Prince Bowie what was going on, and finished with the message from the owl the night before. Prince Bowie, as all loons, are taught how to communicate with the Underworld, which lies deep in the fresh waters of lakes in the North, which Walla Walla Lake was one. The Underworld possessed knowledge of all ages. Prince Bowie had been to the Underworld many times and knew the answer to this plague could be found there.

“Isis, it would be an honor to travel to find out how to save your Clan.”

Loons are decisive and creatures of action. There was no time like the present. Filling his lungs with air, Prince Bowie submerged and began paddling with his strong feet to the Underworld. He swam and swam straight down, until not even a particle of light could be discerned. His lungs were able to process the oxygen efficiently, or he would have had to surface or drown.

After 30 minutes down, a glowing turquoise blue square appeared. This was the door to the Underworld. Almost as if it had eyes or other sensors, as Prince Bowie approached, the door opened for him. He was in a place that was not water but not air. Nor was it solid. He neither swam, flew, or walked. He just was. Images began to present themselves in Prince Bowie’s mind, much like a dream. He saw a lake and a forest he recognized. Almost like a telescope, the image zoomed in on a patch of herbs near the lake’s edge. He saw all of the wolves in the region walking up to the patch and eating the herbs. Then he saw 100 puppies running in a field of daisies. Prince Bowie felt himself being pulled towards the glowing door, which opened to let him out into the lake. He paddled himself as fast as he could to the surface and found Isis curled on a bit of moss under an oak tree, asleep.

Prince Bowie led Isis to where his vision was, and just as the vision showed, there was a patch of the healing herbs. Isis enlisted the help of the Owl Pack to spread the word about eating the herbs and to warn the others about not getting near the tamed wolves because of the sickness.

The lessons learned by Isis and the Wolf Clan were not to judge others harshly because they choose a different path and are curious. Let them be. They learned that it is good to build healthy alliances with those where mutual respect can be seen. They learned there are times when you have to ask for help. They learned that there are vital jewels of wisdom that can be learned in the Underworld (collective unconscious, dream world) that can help in the real world.
The End.

Mindlovemisery Menagerie has given a writing prompt of a Spiritual Quest, with the following:
Pick A Spirit Animal (it doesn’t need to be a real animal and also feel free to take one of the many online tests and work in the random results)
Pick A Destination
Pick An Activity
Include An Obstacle (physical or psychological that must be overcome)
Include A Lesson Learned On Your Journey