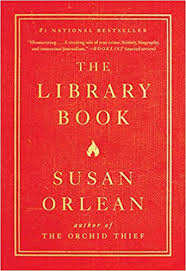 I just finished this book and would again like to thank Hans from Hanspostcard for his urging to read it – as I will now urge you to read it. The hub of the book is about the biggest fire you never heard of in a library because it happened on the same day in 1986 as Chernobyl. But it is about the hub of libraries themselves which is what makes it compelling reading. I could have binge-read it over a weekend but instead paced myself to absorb what I was reading in a most pleasant fashion, even when the content was downright agitating. Before you think the book is a downer, please understand the positive content far, far outweighs the negative.

As I usually do while reading books, I made notes. If it is a book I own, the notes are made within the book. As this volume was lent to me by a friend, I had to make the notes separate. Included are only excerpts; it is not a comprehensive list, just crumbs of highlights in a cookie factory’s worth of wonder. I thought or said, “What!?” more times while reading it than 99% of all books I’ve read.

p.11 The library is a gathering pool of narratives and of the people who come to find them. It is where we can glimpse immortality; in the library, we can live forever.

p. 86 Peggy Murphy, who manages Collection Services, started her library career as a teenager in Mount Vernon, New York, at a time when the head librarian summoned clerks using the kind of metal clicker now most often used to train dogs. Each clerk was summoned by his or her unique click pattern. Murphy’s was two short clicks. The books that the head librarian in Mount Vern deemed ‘dangerous’ – this is, sexual – were shelved in a locked metal cage in the basement of the library. Baudelaire, Balzac, and Masters and Johnson were there, behind bars. Somehow, Murphy figured out where the key to the cage was stored, and during her breaks, she sneaked in and read. By the time she graduated from high school, she had managed to read every single one of the caged books. ‘It broadened my worldview,’ she likes to say.

p. 98 Nazis destroyed an estimated 100 million books during their 12 years in power.

p.100 “There where one burns books, one in the end burns men.” – Heinrich Heine

p. 102 Burning books is an efficient way to conduct a war, since books and libraries have no military value, but it is a devastating act. Destroying a library is a kind of terrorism. People think of libraries as the safest and most open places in society. Setting them on fire is like announcing that nothing, and nowhere, is safe.

p. 102 Books are a sort of cultural DNA, the code for who, as a society, we are, and what we know. All the wonders and failures, all the champions and villains, all the legends and ideas and revelations of a culture last forever in its books. Destroying those books is a way of saying that the culture itself no longer exists; its history has disappeared; the continuity between its past and its future is ruptured. Taking books away from a culture is to take away its shared memory. It’s like taking away the ability to remember your dreams. Destroying a culture’s books is sentencing it to something worse than death: It is sentencing it to seem as if it never lived.

p. 267 [It is a]… rare role libraries play, to be a government entity, a place of knowledge, that is nonjudgmental, inclusive, and fundamentally kind.

p. 291 Worldwide, there are 320,000 public libraries serving hundreds of millions of people in every country on the planet.

p. 309 The library is a listening post. You don’t need to take a book off a shelf to know that there is a voice inside that is wanting to speak to you, and behind that was someone who truly believed that if he or she spoke, someone would listen.

OK now, my earnest plea is that every single person reading this post makes it a point to visit a public library in their vicinity in the next few days. Go ahead, walk in, take a look around. Maybe sit a spell. Feel the ambience. Maybe browse a few shelves. Even take a few moments – that’s all it takes, my friend – to get a library card. A world you may not have visited for awhile will open up before you, like the children in CS Lewis’ series who discovered the magic wardrobe.