As each morning brings the ritual of opening all of the blinds, windows, and sliders, so does the dusk bring their closing. At times, the ritual is disrupted when heavy storms blow rain in; depending on the wind’s direction doors and windows are closed accordingly, to keep out pooling water.

One such afternoon, when the wind blew heavy spray in from the south, I went into the “mini-greenhouse” area to pull the outer slider shut. As there is a leak in the corner of the 6-foot by 8-foot area, a bucket has been placed under the leak to catch the drip. Monitoring the bucket to empty as needed, it was about half-full, so I decided to empty it.

Stepping over to the bucket, my hand reached for the handle. It was then that I saw a large spider perched on the inside of the bucket, down near the water, almost like it was fishing. Keeping composure and hoping the spider didn’t spook and jump out and run towards the inner house, a thought crossed my mind to push it in then quick dump the bucket outside, but again, not wanting to spook the critter, I backed up and let it be.

I went to a website for Michigan spiders to try to identify it. Not being an arachnologist (?) this is the closest picture of what I saw.

Notes from here: The spider species Eratigena atrica, commonly known as Giant House Spider, belongs to the genus Eratigena, in the family Agelenidae. 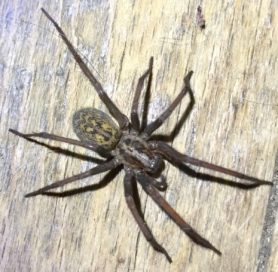 Kim is today’s host of dVerse. Kim says:
For this week’s Haibun Monday, write about an encounter with an insect: it can be a beautiful or a scary experience, one that enlightened or surprised you; it can be about an ordinary or an unusual insect. Aim to write no more than three tight paragraphs about your encounter with an insect, followed by a traditional haiku that includes reference to the season.

Is a spider an insect or its own species???  I hope it qualifies!