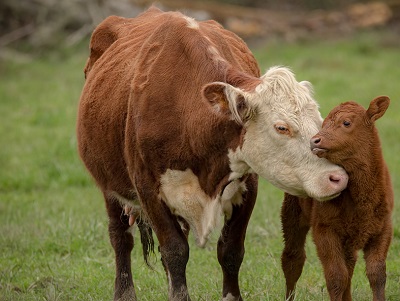 I watched a metallic spheroid rise in the distance over the lip of the arroyo. A shiny dime in a green-blue cloudless sky, the sun’s position behind and below it gave its outline a golden, mesmerizing aura.

Sound below broke the spell when a calf bawled to her mother halfway up the ridge.

Not only the calf’s mother and I heard it. The glowing dime tilted down towards the sound, then began to move closer.

They say cows are stupid, but when she saw her calf in danger, she acted without hesitation, hurling her substantial mass forward at a fair pace. It was anyone’s guess who would reach the baby first.

A laser beam cut deeply along her back, removing her hide in a strip. She screamed across the arroyo, still trying to reach her child.

Neither survived; I lived to tell the tale.

Linda is today’s host for dVerse.  Linda says:
The line I have chosen was taken from [Jim Harrison’s] book, Dead Man’s Float from the poem titled Cow. I will not include the poem so as not to influence your words.  Here is the line you are to use within your flash fiction of 144 words or less.

“A cow is screaming across the arroyo.”