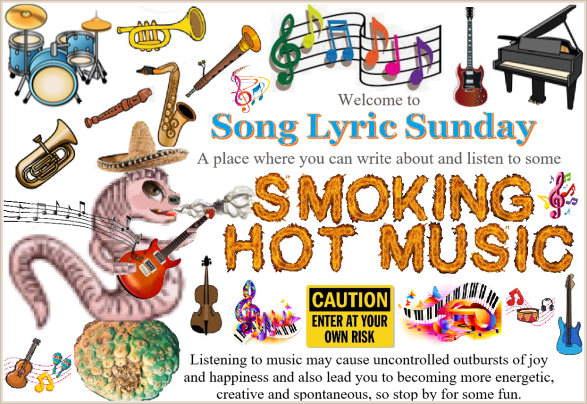 Jim Adams is the music aficianado host of Song Lyric Sunday.  Jim says:
This week we have Diamond/Emerald/Jade/Pearl/Ruby/Sapphire and I hope that everyone will be able to find a song that uses one of these prompt words.

On a song search with the glittering prompts I came across this song by this group right away. It isn’t often that I stumble onto new music I like on a first try. The lyrics are sharp and provocative and the guitar is pounding.  Hope you enjoy it on this beautiful Easter Day!

Echobelly are a British rock band, debuting in 1994 with their album Everyone’s Got One. They were often compared to Blondie and were influenced by Morrissey, who himself was a fan of the group.

The most prominent part of Echobelly’s success formula was vocalist Sonya Madan, who was also the group’s primary lyricist. Born in Delhi, India, before moving to England at the age of two, Madan had an unusual background for a pop star. Her rigid upbringing made rock music taboo for her as a youngster and she did not attend her first rock concert until she was in college.

Lustra was Echobelly’s third album, released in November, 1997.”Here Comes The Big Rush” is the second and final single from it, released in October of the same year. It reached #56 in the UK Singles Chart.

Save your point of view
For the manic charm that he puts you through
When he wears your pearls, your ruby dress
And he looks so good with his sunken chest
There’s a certain charm

To the pretty boy that is on my arm
He’s my double friend, a boy and a girl
When he says,
Paint my face, lick your mouth
Fake a yawn and we’ll go out and glow
We’re on our way to somewhere in particular
I’ll take you somewhere, where you haven’t been
And I’ll show you a good time, like you’ve never seen

Here comes the big rush
There’s a special ring
To his Cuban heels and his six-pack swing
His mother’s clothes are his new disguise
And his good advice when he says:
Vanity’s a virtue, lets no one in to hurt you
I’ll take you somewhere, where you haven’t been
And I’ll show you a good time, like you’ve never seen
Here comes the big rush
You’re one of the boys
Pump that pipe dream, sell you something

New, new, new
We’re on our way to somewhere in particular
I’ll take you somewhere, where you haven’t been
And I’ll show you a good time, like you’ve never seen