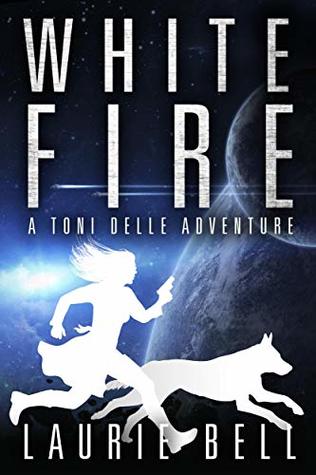 As the lights of the metropolis brightened, shadows crept into alleyways and emerged from dark corners, ready to conduct activities that should never see the light of day. In the heart of this darkness, evil held its breath.
–Laurie Bell. White Fire (A Toni Delle Adventure) . Laurie Bell. Kindle Edition.

What’s not to like about Special Secret Agent Toni Delle, who has see-through skin, heightened senses, courage and grit seasoned with experience; AND who has her own C-bot (Canine Robot, Mate) and a Computer Intelligence Interface (CII) named Zach, who has a knack for initiative and a sassy cuteness that’s hard to resist. She’s also an electronics expert who loves using and tweaking high-tech gadgets.

Agent Delle’s interplanetary travels on her trusty lightship Blackflame, while she’s outsmarting slick smugglers and getting into multiple hand-to-hand combats and other dangerous situations, keeps things interesting throughout, “White Fire.”

Amongst the dangerous missions, there are sexy, intelligent females and chiseled, intelligent men, all doing their things, legal and illegal. The dialogue is sharp, the descriptions vivid, and Agent Delle’s running stream-of-consciousness sparkles.

I hope that “White Fire” is just the first of many books chronicling the sci-fi adventures of Agent Toni Delle.