I stayed up late last night watching episodes of, “Justified,” and didn’t get up until almost 1 today — say what?!  Usually there is a set routine of turning things off, turning things on, opening things, closing things, etc.  Not this morning, er, afternoon.  First thing was opening up the bedroom door to look at Mlady, face to face with Two Hung Low (2HL,) with the slider and screen between them.   I expected to see him run when he saw me, but he dropped onto the cement and started rolling on a stem of catnip laying out there.  Me, still in jammies, opened the slider, then the screen, and stepped out.  Did 2HL run?  No, he meowed and kept rolling.  Was he going to let me pet him?  Reaching slowly towards him to give him a chance to skeedaddle, he stayed put.  I patted him and he rolled happily.  He stayed put as I scratched his head and neck, which felt either encrusted with dirt or small scabs, and I saw a large scar across the top of his head.  He’s still like a bag of bones, but he’s heavier than he was.  Eating a bowl of food a day tends to do that.  I kept our contact to a minimum for a first time, then came back in to wash my hands.  He came up to the screen and took a swat at Mlady who was observing all of it (Dotty was too, but from a distance.)  I went through my beginning of day ritual, then poured some food into his dish out in the carport.  I went back to the slider with my phone to snap pictures, then to lead him to the food and water.  He followed without hesitation and sniffed the food but didn’t eat any.  I came back in, did some more things, then checked on him again.  He headed back to the garage and hasn’t been seen since.

Without further ado, I present to you, Two Hung Low:

I’ve got an email in to a lady who traps strays and gets them medical treatment, including spaying/neutering, vaccinations, blood work, etc.  Her area is in Grand Rapids though, which is about 50 miles from here.  Haven’t heard back from her yet.

Next is a little feller/gal I mentioned a few times in comments here and there.  Every day I walk out to the mailbox, I see him/her sitting in the ditch.  There were 2 at first now only 1. Jeremiah (name regardless of gender) used to jump in on sight of me but has gotten used to my daily walk.  Today, now that my camera with a zoom has batteries again, I snapped a few pictures of Jeremiah, who I present now: 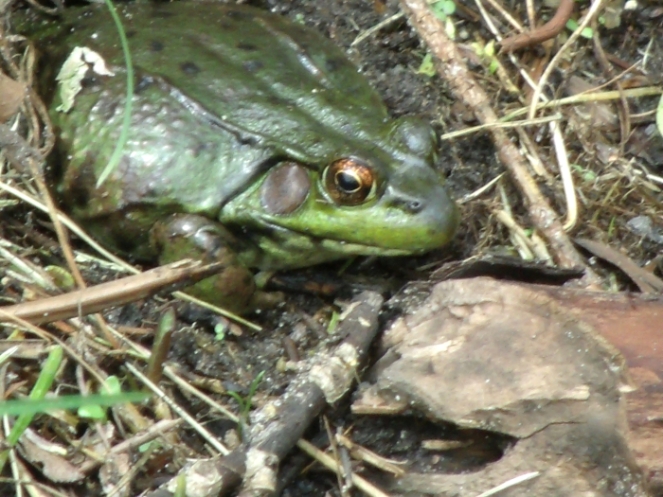