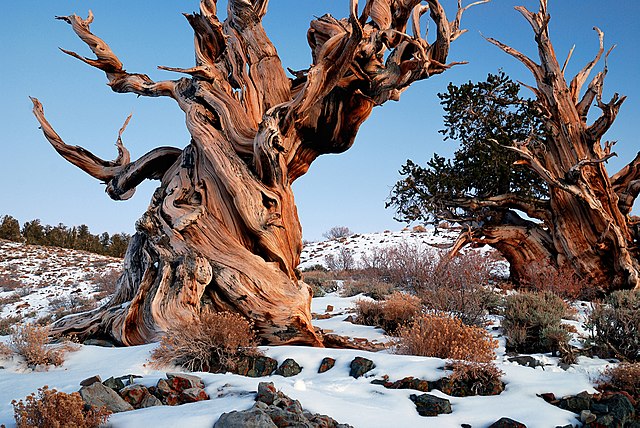 I prefer keeping in mind even the possibility
that existence has its own reason for being.
— Wisława Szymborska, “Possibilities”

We were committed tree-huggers, yet we were scientists first. Space-X and Amazon Foundation sponsored our team to study the White Mountain bristlecone pines to figure out how to mimic their hardiness via gene engineering. Humankind’s hourglass had no flips left. Shuttles were on standby to the earth-orbiting ships.

Congress lifted all protections from the trees. The UN Assembly suspended the bill of human rights so prisoners could be test subjects. Musk built us the desert lab and Bezos filled it with equipment. Nat Geo recorded and broadcast updates globally.

The cones went first. A year later each tree had been cross-sectioned. They had the last word – we would be no more.

Would humans come back in another form? Or would we exist as wandering ghosts, finally harmless? I prefer keeping in mind even the possibility that existence has its own reason for being.

About the top image, taken by Rick Goldwaser on 11/29/08: This is a long exposure taken after sunset in the Bristlecone Pine Forest of the White Mountains in California. This particular grove of bristlecones are the oldest living things on the planet, many of them are over 4000 years old and the oldest has been dated to over 4700 years.

What I find particularly fascinating about the bristlecone pine is that they generally compete poorly in less-than-harsh environments, making them hard to cultivate. In gardens, they succumb quickly to root rot. They do very well, however, where most other plants cannot even grow, such as in rocky dolomitic soils in areas with virtually no rainfall. I’ve been thinking about them since seeing a photo a week or so ago and how the tree appears almost completely dead except for a few spindly green sprouts.

Merril is today’s host of dVerse’ Prosery. Merril says:
Since this is prosery, I’ve chosen one line from [Szymborska’s] poem, “Possibilities,” which you must incorporate into a piece of prose. This can be either flash fiction, nonfiction, or creative nonfiction, but it must be prose! And it must be no longer than 144 words, not including the title.