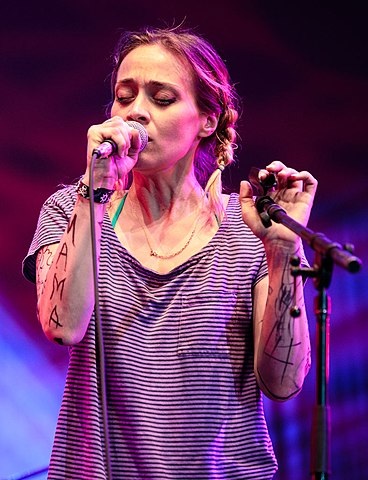 Fiona Apple McAfee-Maggart (born September 13, 1977) is an American singer-songwriter. Apple is an eleven-time Grammy Award nominee and one-time winner whose albums have reached the top fifteen on the U.S. chart in four consecutive decades.

The youngest daughter of actor Brandon Maggart, Apple was born in New York City but was raised alternating between New York and her father’s home in Los Angeles. Classically trained on piano as a child, she began composing her own songs when she was eight years old. Her debut album, Tidal, containing songs written when she was 17, was released in 1996 and received a Grammy Award for Best Female Vocal Rock Performance for the single “Criminal“. She followed with When the Pawn… (1999), produced by Jon Brion, which was also critically and commercially successful and was certified platinum.

For her third album, Extraordinary Machine (2005), Apple again collaborated with Brion, and began recording the album in 2002. However, Apple was reportedly unhappy with the production and opted not to release the record, leading fans to protest Epic Records, erroneously believing that the label was withholding its release. The album was eventually re-produced without Brion and released in October 2005. The album was certified gold, and nominated for a Grammy Award for Best Pop Vocal Album. In 2012, she released her fourth studio album, The Idler Wheel…, which received critical praise and was followed by a tour of the United States and was nominated for the Grammy Award for Best Alternative Music Album in 2013. Apple’s fifth studio album, Fetch the Bolt Cutters, was released in 2020 to widespread acclaim, becoming the number one album of 2020 on Metacritic, receiving the first perfect 10.0 score from Pitchfork since Kanye in 2010 and earning multiple Grammy nominations, including two for the lead single “Shameika”.

One thing to share:
At age 12, Apple was raped outside the apartment she shared with her mother, step-father and sister in Harlem. She subsequently developed an eating disorder, purposely slimming her developing body, which she saw as “bait” for potential predators. “I definitely did have an eating disorder,” she recalled. “What was really frustrating for me was that everyone thought I was anorexic, and I wasn’t. I was just really depressed and self-loathing.“

After the rape, Apple began attending Model Mugging classes, practicing self-defense, but continued to suffer panic attacks while walking home from school, which led to her relocating to Los Angeles to live with her father for one year. In Los Angeles, Apple attended Alexander Hamilton High School for her sophomore year.

In a 2000 interview, Apple stated that, despite speculation from journalists, she did not write songs about the trauma surrounding her rape: “It doesn’t get into the writing. It’s a boring pain. It’s such a fuckin’ old pain that, you know, there’s nothing poetic about it.“