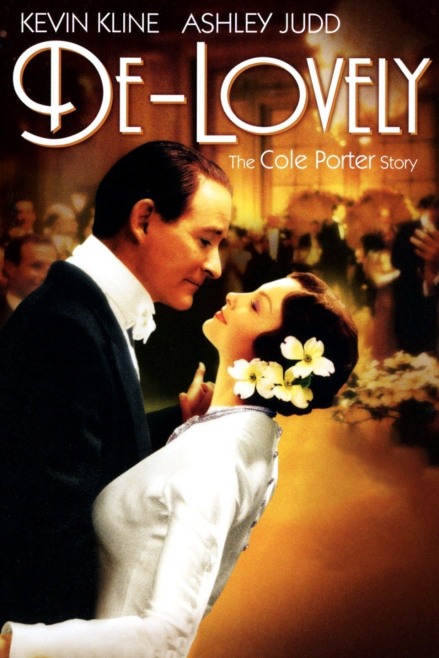 Being on the lookout for possible movies to review for the draft, when I saw the trailer for, “De-Lovely” I borrowed and watched it. Although “De-Lovely” is listed in imdb as biographical and drama — which it is — they need to add it as a romance and as a musical also as there are songs sung throughout it!

The name Cole Porter is one that is familiar but I didn’t know much about him. From wikipedia:

Cole Albert Porter (June 9, 1891 – October 15, 1964) was an American composer and songwriter. Many of his songs became standards noted for their witty, urbane lyrics, and many of his scores found success on Broadway and in film. Born to a wealthy family in Indiana, Porter defied his grandfather’s wishes and took up music as a profession. Classically trained, he was drawn to musical theater.

Before getting into the plot of the film I want to talk a little about the two stars in it. I’ve loved every movie I’ve ever seen Kevin Kline in. He has a spark to him that I adore. He’s classy. He’s also got a brilliant comedic flair that lights up a room. Ashley Judd has an expressive face that is a joy to read here. She deserved a major award for her role in this (as does he!) It’s two performances of a lifetime, in my opinion.

Now on with the plot. The format used is that Cole (played by Kline) is already dead and being shown flashbacks from his life by “Gabe,” (played by Pryce) who I’m guessing is the angel Gabriel. Set in the early 1900s, the story begins in Paris with Cole at the piano at a fancy dinner party trying to get the guests’ attention with his songs. Linda (played by Judd) walks in looking like a million bucks, sees two guys near the piano (Cole and Gerald, his best friend, played by McNally) and asks the woman she’s standing next to (Sara, Gerald’s wife, played by Nelson) which one is Cole Porter. Cole notices Linda also and is soon hamming it up at the piano; Linda and the partygoers are drawn into the merriment. It doesn’t take Cole and Linda long to recognize both their attraction for each other and that the chemistry is right between them to make things happen. A whirlwind romance begins where each is almost surprised by how powerful this thing is that they share.

At the time they’ve met, Linda is a divorcee just coming out of a physically abusive relationship, and Cole has what seems like a longstanding lifestyle of philandering with men. The romance helps Linda to heal and Cole abstains from his dalliances, at least temporarily. The rest of the film alternates between watching Cole’s career ascendance, with Linda’s support and guidance, and the conflicts that creep into their relationship when Cole resumes his philandering.

The dialogue is exquisite. There are lush settings wherever they go, which includes various locations in the UK and in Italy (in the movie they are in Paris, Venice, NYC, and CA.) The homes and nightclubs are gorgeous. The costumes and vehicles are wonderful. And the music! Oh, the music! Music weaves itself throughout with the above-mentioned musical artists, shown on stage in various venues.

What I like best about “De-Lovely” is the genuinely felt love between Cole and Linda. Kline and Judd make a believer out you.