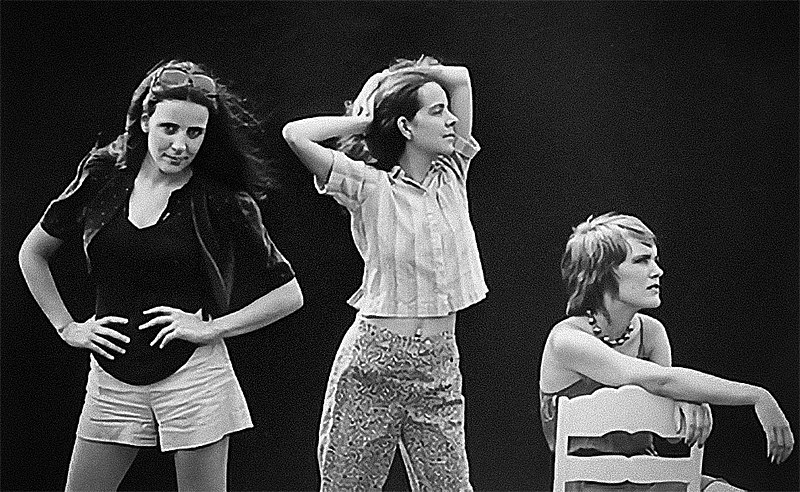 The Roches (Maggie, Terre, and Suzzy Roche) were a vocal group of three songwriting Irish-American sisters from Park Ridge, New Jersey, United States. They were known for their “unusual” and “rich” harmonies, quirky lyrics, and casually comedic stage performances. The Roches were active as performers and recording artists from the mid-1970s through 2017, at various times performing as a trio and in pairs.

In the late 1960s, eldest sister Maggie (October 26, 1951 – January 21, 2017) and middle sister Terre (pronounced “Terry”, born April 10, 1953) attended Park Ridge High School, but dropped out of school to tour as a duo. Maggie wrote most of the songs, with Terre contributing to a few. The sisters got a break when Paul Simon brought them in as backup singers on his 1973 album There Goes Rhymin’ Simon. They got his assistance (along with an appearance by the Oak Ridge Boys) on their only album as a duo, Seductive Reasoning (1975).

Female singing duos must function as mutual support groups; last time a women’s sensibility this assured, relaxed, and reflective made it to vinyl was Joy of Cooking. These folkies manque are a little flat here, a little arch there, but in general the shoe fits; no ideological feminism, but plenty of consciousness.

Later in the 1970s youngest sister Suzzy (rhymes with “fuzzy”, born September 29, 1956) joined the group to form the Roches trio.

Around this time, they parlayed bartending jobs at famous Greenwich Village folk venue Gerde’s Folk City into stage appearances, an experience they commemorated in their song, “Face Down at Folk City” (from Another World, 1985). It was here that they met many of their future singing and songwriting collaborators. Terre was now writing songs as well, and by the time of their first album as a trio, The Roches (1979), Suzzy had also begun writing. Robert Fripp produced the album. Maggie’s “The Married Men” from this album was eventually to become the biggest hit of the songwriting trio – not for them, but for Phoebe Snow. After Snow and Linda Ronstadt performed the song in a duet on Saturday Night Live, the Roches were invited themselves to perform on the show a few months later in 1979 at the behest of Paul Simon. They did two songs, both unreleased at the time, “Bobby’s Song” and “The Hallelujah Chorus”.

Throughout the 1980s, the Roches continued to release their music to small audiences, little or no air play, and only modest record sales. A 1983 episode of the PBS concert series Soundstage was devoted to an hourlong performance by the trio, and they appeared on The Tonight Show Starring Johnny Carson in November 1985, where they performed their song “Mr. Sellack”. In 1990, they returned to their Christmas-caroling roots with the release of the 24-track We Three Kings, which included the a cappella “Star of Wonder”, written by Terre. After another pop album (A Dove, 1992), they recorded an entire album of children’s songs entitled Will You Be My Friend?, featuring a song by brother David and various young backup singers, including Suzzy’s daughter, Lucy Wainwright Roche.

After a tour interrupted by the death of their father, the Roches released Can We Go Home Now (1995), the last original recording they released as a trio until 2007.

In 1997, the sisters formally put their group on long-term hold. They continued to work on solo projects and often collaborated on albums and performances. Terre teaches guitar workshops and has released a solo album. Suzzy, who has acted on the stage and in several movies, released two of her own albums and two with Maggie, with whom she has toured. All three sisters periodically participated in New York-area events. At the end of 2005, the three Roches (with brother Dave) reunited for a short but successful holiday tour. Several more appearances in the U.S. and Canada took place in 2006–07, and in March 2007, after a 12-year hiatus, the Roches released a new studio album, Moonswept. Following the tour for Moonswept, the Roches announced that they would no longer be touring, although they continued to make isolated appearances individually and as a group, mostly in and around New York City.

Other things to share:
On January 21, 2017, Maggie Roche died from breast cancer at the age of 65. In a statement on Facebook, Suzzy wrote that Maggie “was a private person, too sensitive and shy for this world, but brimming with life, love, and talent. She was smart, wickedly funny, and authentic — not a false bone in her body — a brilliant songwriter, with a distinct unique perspective, all heart and soul.“

On June 25, 2019, The New York Times Magazine listed the Roches among hundreds of artists whose material was reportedly destroyed in the 2008 Universal fire.

Terre Roche continues to perform publicly in New York City, and since 2016 has led a “Sunset Singing Circle” at Battery Park on the southern tip of Manhattan under the auspices of the Parks Department.

Hallelujah Chorus from the third album was also a big hit in that it has been used in a lot of movies and is -the- three voice arrangement that even major choirs now use.

I’ve added it as a bonus track for these lovely voices.  Enjoy!  And thank you, Trent!