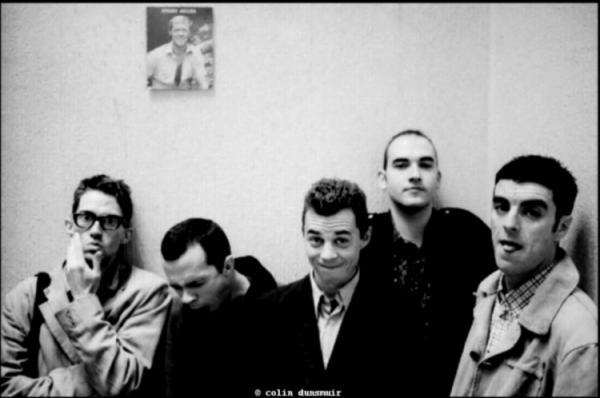 Trashcan Sinatras are a Scottish band that was formed in Irvine, Scotland in 1986 whose members met through the club/pub music scene there. The original band members included Frank Reader (bass), Davy Hughes (guitar and vocals), George McDaid (guitar) and Paul Forde (drums). By late 1986/early 1987, the line-up had changed to include Paul Livingston (guitar), John Douglas (guitar) and Stephen Douglas (drums), along with Frank Reader moving to vocals and Davy Hughes to bass. While the band has included other members for short periods of time over the years, this is the line-up that would record the bulk of the Trashcan Sinatras’ music to date.

Cake is the debut album of Trashcan Sinatras and was released on June 25, 1990.

Opportunity Knocks is the opening cut on the album and was released in February 1990 as an EP and also as a promotional single in the U.S. Wikipedia has compiled quite a few assessments of the song, including:

…an absolute howitzer of a single with one eye firmly on the Top 40, jangly guitars, a snappy beat and some marvelously intriguing lyrics providing the ideal backdrop for Frank’s love-torn vocals. – Tim Southwell of Record Mirror

one of the “standouts” [on the Cake album] – Orange Coast Magazine

a high-spirited grouse about fickle fame and fleeting youth, is the best – and eeriest – number. – Carlene Bauer

The band has remained active since its formation. To learn more about them, go to their website here. Where that site is more about current music, if you want the real lowdown about the band, I found this one that is an archival treasury, called Five Hungry Joes.

Though I ought to be learning
I feel like a veteran
Of ‘Oh, I like your poetry
But I hate your poems’

In the lap of luxury
It comes to mind
Is this headboard hard?
Am I a lap behind?

Though I ought to be learning
I feel like a veteran
Of ‘Oh, I like your poetry
But I hate your poems’

Know what it’s like
To sigh at the sight
Of the first quarter of life?
Ever stopped to think
And found out
Nothing was there?

They laugh to see such fun
I’m playing blind man’s bluff
All by myself
And they’re chanting
A line from a nursery rhyme
‘Ba ba bleary eyes
Have you any idea?”

Years of learning
I must be a veteran
Of ‘Oh, I like your poetry
But I hate your poems’

And the calendar’s cluttered
With days that are numbered
I’ve turned twenty one, I’ve twist
I’m bust and wrong again