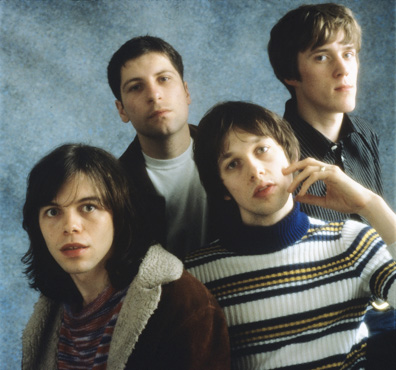 Ride are an English band formed in Oxford in 1988. The band consists of Andy Bell (vocals, guitar, piano, harmonica,) Mark Gardener (vocals, guitar,) Laurence “Loz” Colbert (drums,) and Steve Queralt (bass.) The band were initially part of the “shoegazing*” scene that emerged in England during the early 1990s.

Nowhere is Ride’s debut album, released on October 15, 1990. All writing credits were equally credited to all band members. The album had 8 tracks and “Vapour Trail” was the final track on it; the CD had 3 bonus tracks. “Vapour Trail” was later released as a single in the United States in early 1991. The song features a distinctive swirling guitar riff, a strong, fill-based drum beat, and a coda that includes a string quartet.

In 2001, the band briefly reunited for a one-off performance for a television show. Ride announced their second reunion in November 2014. In November 2015, the band released a special 25th anniversary edition of Nowhere across two separate formats: a CD/DVD set, and a colored-vinyl double LP.

They achieved their biggest commercial success with their 1992 single “Leave Them All Behind“, which reached No. 9 on the UK Singles Chart.

Following the break-up of the band in 1996, members moved on to various other projects, most notably Bell who became the bassist for Oasis. The band has had a total of 6 studio albums, with the last two in 2017 and 2019. The band is still active with the original lineup. Not only that they are about to begin a 30th Anniversary tour! Learn more at their website.

After the first listen, I realized the lyrics end halfway through. Listening to the song a few times, my assessment is that there isn’t anything to dislike about it; yet nor is there anything in particular to like about it. It’s kind of pleasantly blah, and that’s ok.

First you look so strong then you fade away
The sun will blind my eyes, I love you anyway
Thirsty for your smile, I watch you for a while
You are a vapour trail in a deep blue sky

Tremble with a sigh, glitter in your eye
You seem to come and go, I never seem to know
And all my time is yours as much as mine
We never have enough time to show our love

*Shoegaze (originally termed shoegazing and sometimes conflated with “dream pop”) is a subgenre of indie and alternative rock characterized by its ethereal mixture of obscured vocals, guitar distortion and effects, feedback, and overwhelming volume. It emerged in Ireland and the United Kingdom in the late 1980s among neo-psychedelic groups who stood motionless during live performances in a detached, non-confrontational state. The name comes from the heavy use of effects pedals, as the performers were often looking down at their pedals during concerts.