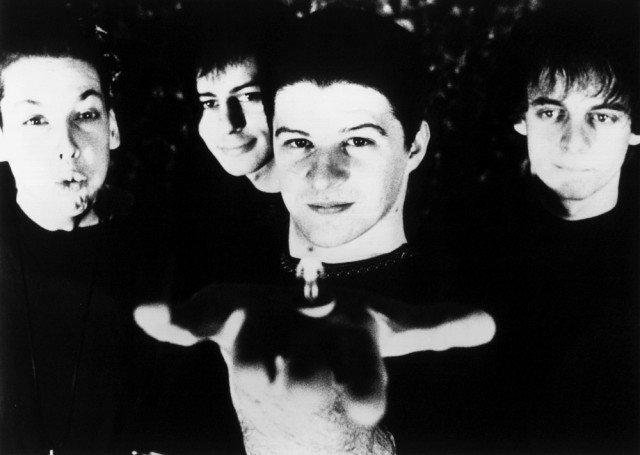 Pale Saints were an English alternative rock/shoegazing band formed in 1987 in Leeds by singer-bassist Ian Masters, guitarist Graeme Naysmith and drummer Chris Cooper. The group began as a jangly indie pop band influenced by Primal Scream’s early sound. By the time they recorded their first EP, Barging Into the Presence of God, released in 1989, the band went into a direction that displayed a mix of Ian Masters’ ethereal, choirboy-like vocals along with dark atmospheric and noisy pop tunes.

The group’s first album, The Comforts of Madness, was released on February 12, 1990 and reached the top 40 of the UK Albums Chart. “Sight of You,” which was on their EP, was remixed and included as the 10th track on the album.

I’m not sure if this is the version that was on the EP or not.  It is labeled “Demo.”

Pale Saints appeared on some micro-indie compilations in 1988 and early 1989, but it was a demo that enticed the 4AD label’s Ivo Watts-Russell, who without haste caught a gig and consequently signed the band (along with support act Lush). Watts-Russell was particularly taken with “Sight of You,” and in a few months, a remixed/retouched version of the drifting ballad led Pale Saints’ debut EP. Almost sickly sweet and seemingly innocent until Ian Masters’ chorister-like voice lets slip a covetous blood-soaked fantasy — the escalation from “bad”/”sad” to “red/”dead” is easy to miss — “Sight of You” went over well, landed on BBC DJ John Peel’s listener-driven Festive 50 for 1989, and was covered by Ride. The following February, coincidentally between the recording and broadcast of Ride’s take for a Peel session, “Sight of You” was placed in a new context on The Comforts of Madness. Perhaps seen as too significant to be left off, and downplayed so as to not overstress its signature status, “Sight of You” was tucked deep into the LP’s second side, thereby emphasizing the many other colors of frayed-nerve dream pop — as filtered through avant-folk, West Coast psychedelia, the Paisley Underground, power pop, and C-86 — the trio had to offer.

Reviewing The Comforts of Madness for NME, Simon Williams praised the album as an “unnervingly multi-dimensional collage of melody and friction” with “at least eight Great Pop Tunes, all hooklines and absolutely no stinkers.” The magazine later named it the 45th best album of 1990.

In 2016, Pitchfork ranked The Comforts of Madness at number 21 on its list of the 50 best shoegaze albums of all time.

I’ve listened to the song several times and I like it more with each listen.  It’s got the jangly guitars going for it and it has Ian Masters’ voice, which is smooth but still carries the emotion it needs to for the lyrics.  I also really like how he pauses some words and sings through the ends of some lines.  There are few videos out there of the band playing live for this album.

There is a Pale Saints Appreciation Society on facebook here.

what can i do?
what can i say?
the world was large
and i felt very small
what’s gonna happen?
how will i know
when things are back
the way they used to be before?