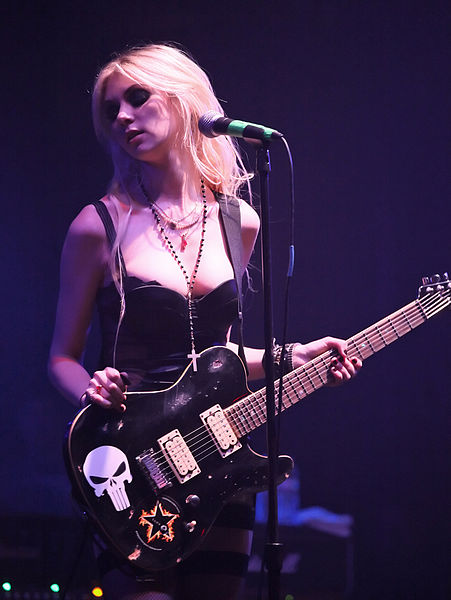 music is where I can be me
–Taylor Momsen

Taylor Michel Momsen (born July 26, 1993) is an American singer, songwriter, model, and former actress. Momsen has been the front woman of the American rock band The Pretty Reckless since their inception in 2009.

In March 2009, Momsen stated in an interview with OK! magazine that her band, The Pretty Reckless, had signed a deal with Interscope Records. The band played on their first tour opening for The Veronicas on their Revenge Is Sweeter Tour in spring 2009. After the tour, Momsen began working with guitarist Ben Phillips, who would soon join the band. Momsen subsequently swapped out her former bandmates. She co-writes songs with Phillips; in addition to lead vocals, Momsen also plays rhythm guitar.

One thing to share:
Momsen was signed with Ford Models at a very young age:

My parents signed me up with Ford [Modeling] at the age of 2. No 2-year-old wants to be working, but I had no choice. My whole life, I was in and out of school. I didn’t have friends. I was working constantly and I didn’t have a real life.

I had to include this single that amazingly includes, Kim Thayil (guitar) and Matt Cameron (drums) both formerly of Soundgarden and Matt now the long-time drummer of Pearl Jam.

This woman has a kickass voice!