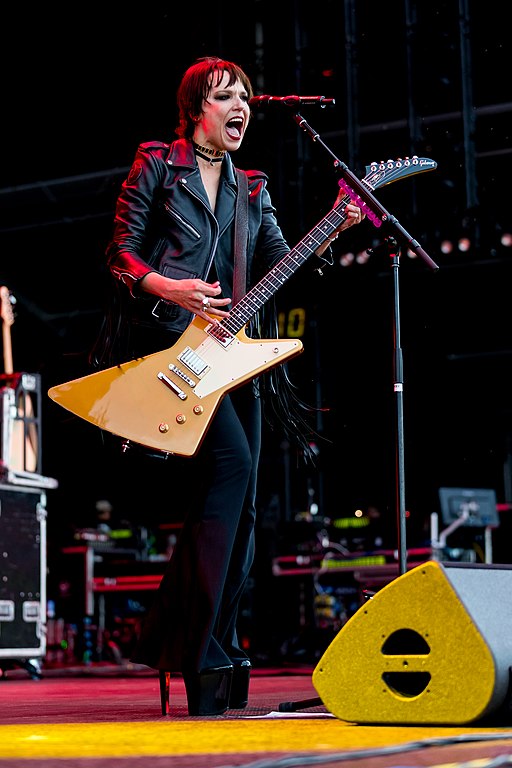 Elizabeth Mae “Lzzy” Hale (born 10/10/83) is an American singer, musician, and songwriter. She is best known as the lead singer and rhythm guitarist of hard rock band Halestorm, which she co-founded with her brother Arejay Hale in 1997. The siblings have been actively writing and performing original music since 1997 when they were 10 and 13 years old, respectively. Lzzy started learning piano at the age of 5; she later progressed to a keytar, and Arejay the drums. She took guitar lessons at 16. The teen siblings released two EPs titled Forecast for the Future in 1997 and (Don’t Mess With The) Time Man in 1999. In 2003, Joe Hottinger joined the band. In Halestorm’s earlier days, Lzzy and Arejay’s father, Roger Hale, played bass before Josh Smith joined the group in 2004.

The group signed a recording contract with Atlantic Records on June 28, 2005, and released a live EP titled One and Done on April 28, 2006. The EP, now out of print, featured an early live version of “It’s Not You.” Their self-titled debut album was released on April 28, 2009. The song “I Get Off” served as the album’s lead single. Both the song and video for their second single, “It’s Not You”, were released in late November 2009. Singles and videos for “Love/Hate Heartbreak” and “Familiar Taste of Poison” were released in 2010.

A lot has happened since then. In January 2021, Hale announced that they had begun recording their next studio album, with a “socially distant” studio process. On August 17, 2021, the first song off of the new album, “Back from the Dead,” was released, and the band later announced the fifth album would be published on May 6, 2022.

One thing to share: In 2021, Gibson announced that Hale was being named the first female Gibson Brand Ambassador. A long time fan and user, Hale had previously partnered with Gibson to design the Limited Edition Lzzy Hale Explorer guitar.

As a Brand Ambassador, it was announced Hale would help create new signature models from Gibson, Epiphone, and Kramer. She was also added to the Gibson Gives Advisory Board, a group “where artists present philanthropic opportunities that fulfill the Gibson Gives Foundation’s mission of creating, developing, and supporting non-profit organizations to advance musicians, youth-focused education, and wellness initiatives.”

The first time I heard Lzzy is when she featured with The HU.  Now if this next song doesn’t give you goosebumps, I don’t know what will.