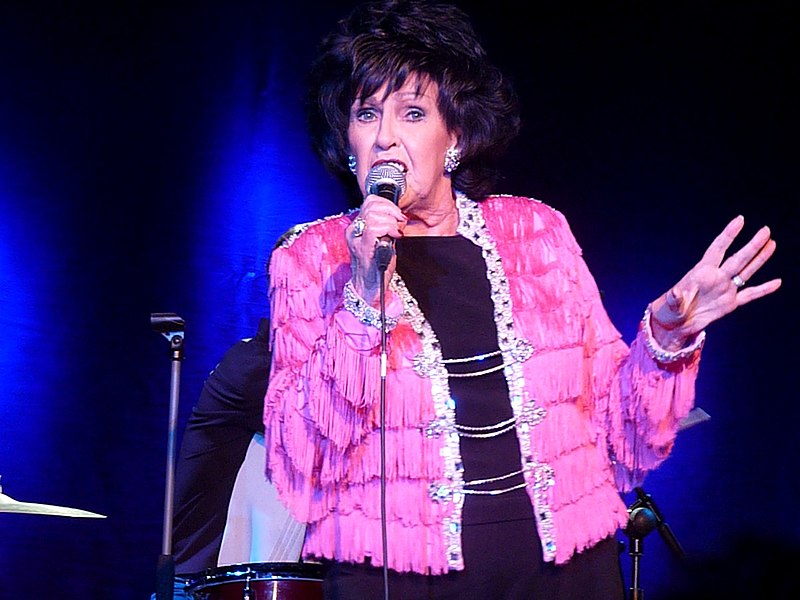 Wanda Jackson in concert in 2011.  Photo by Theresa Sedó

Wanda LaVonne Jackson (b. 10/20/37) is an American singer and songwriter. Since the 1950s, she has recorded and released music in the genres of rock, country and gospel. She was among the first women to have a career in rock and roll, recording a series of 1950s singles that helped give her the nickname “The Queen of Rockabilly”. She is also counted among the first female stars in the genre of country music.

Jackson began performing as a child and later had her own radio show in Oklahoma City. She was then discovered by country singer Hank Thompson, who helped her secure a recording contract with Decca Records in 1954. At Decca, Jackson had her first hit single with the country song “You Can’t Have My Love.” She then began touring the following year with Elvis Presley. The two briefly dated and Presley encouraged her to record in the Rockabilly style. In 1956, Jackson signed with Capitol Records where she was given full permission to record both country and Rockabilly. The label released a string of Jackson’s rock singles, including “Fujiyama Mama,” “Mean Mean Man” (this is an 18-minute live performance) and the top 40 hit “Let’s Have a Party.”

In the 1960s, Jackson moved to the country genre and had several charting singles during the decade. This included “Right or Wrong,” “In the Middle of a Heartache,” “Tears Will Be the Chaser for Your Wine,” and “A Woman Lives for Love.” In addition, she also recorded several selections for the German language market overseas. In 1965, the German single “Santo Domingo” reached number one on the Austrian pop chart. After re-discovering Christianity in 1971, Jackson made gospel music a priority in her career. She left Capitol Records in 1973 and signed with Word Records to focus more on the gospel circuit. Over the next two decades, she released a series of gospel discs.

In 1984, Jackson was sought out by European promoters to tour overseas. The same year, she released her first rock album in two decades and launched a new career in the genre. In the 1990s, her rock records were noticed again by American audiences and she began touring alongside fellow Rockabilly artist Rosie Flores. During this period, she released several commercially acclaimed albums in the rock and roll style, including Heart Trouble (2003) and I Remember Elvis (2006.) Following her 2009 induction into the Rock and Roll Hall of Fame, Jackson collaborated with musician Jack White to record the commercially successful The Party Ain’t Over. For several years, she kept a busy touring schedule before announcing her retirement from performing in 2019. She released her final studio project in 2021.

Every Night Is Saturday: A Country Girl’s Journey to the Rock & Roll Hall of Fame (with Scott Bomar) (2017)

Some things to share:
Unlike other female country performers, Jackson chose to dress in gold lamé outfits and sequined dresses, most of which were designed by her mother. Mary A. Bufwack and Robert K. Oermann [said] that Jackson’s outfits demonstrated “fire, energy, and uninhibited nerve that doubtless shocked conservatives.” The way Jackson moved on stage has also been seen as uncharacteristic of other female performers. Bobby Moore [said] that Jackson’s live shows embedded “upbeat songs” and “high-energy” that “compelled audience members to party like they don’t have to work the next day.” In the [Rockabilly Hall of Fame] interview, she explained her reasoning for putting on a high-energy performance show: “I feel like it’s my job to see that people have a good time when they come out to a concert.“

After Jackson spent time touring with Elvis Presley, the pair’s relationship became romantic in 1955. He asked her to make the relationship official by giving Jackson a small diamond ring that she wore on a necklace. In her autobiography, she explained that Presley “won my heart as I was just beginning to understand what it really meant to embrace my femininity and express myself as a young woman.” According to Jackson, the pair’s relationship ended in 1956 once Presley began appearing in films and Colonel Tom Parker took control of his career.

In 2018, she suffered a stroke, which ultimately led to her retirement.

In 2019, Ken Burns profiled her in his televised documentary titled Country Music.