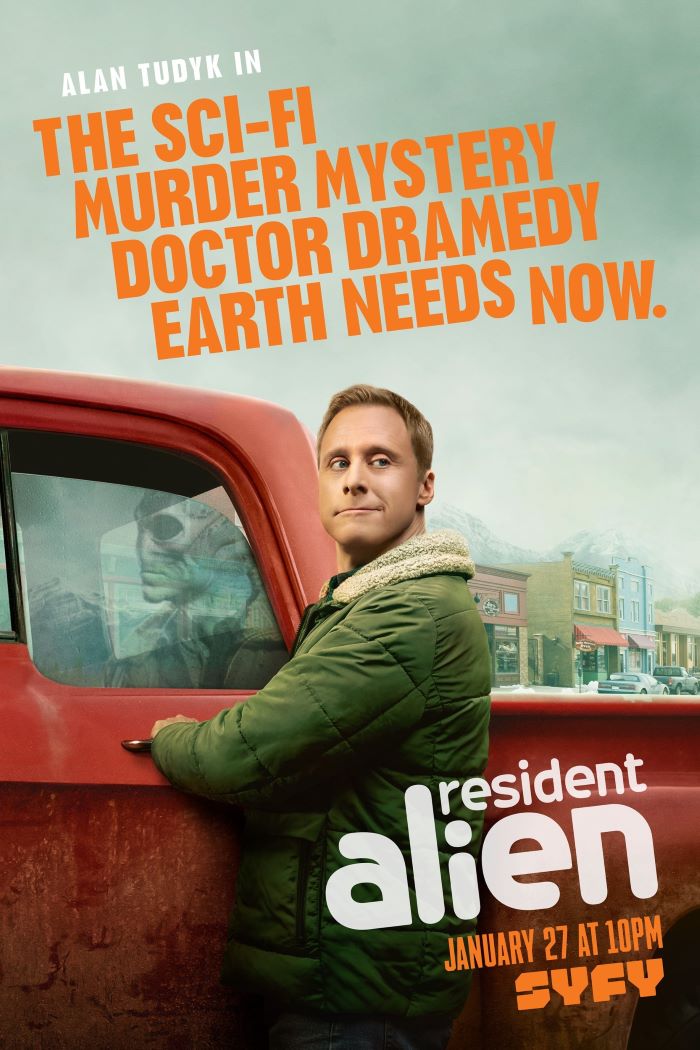 Yes, I am being contrary by changing my mind yet again from the list I started out with. Instead of Showtime’s City on a Hill, which is an excellent series and recommended, I’m going with one that I just watched the first of two seasons of and plan on watching the other as soon as I can find it. The name of the series is Resident Alien and it airs on the SyFy Channel. It is based on a Dark Horse comic by Peter Hogan and Steven Parkhouse, and written for the screen by Chris Sheridan with 11 others getting screen writing credits. There have been 8 different directors for the 18 episodes made so far.

Setting: The story is set in the fictitious town of Patience, Colorado, but it was filmed in and around Vancouver, British Columbia, Canada. There are frequent drone shots of a small community nestled among snowy mountains (which I just learned at imdb: The expansive overhead shots that they often play at the beginning of new segments, which show most and sometimes all of the the town, set in the midst of the surrounding mountains, are pictures of Telluride, Colorado.) Watching TV shows set in small towns in the mountains is the next best thing to being there. Actually the setting brings back pleasant memories of another small town setting of one of my favorite shows of all time, Northern Exposure, set in Cicely, Alaska (but actually filmed in Roslyn, Washington.) While I’m thinking about it, the setting is just one similarity between the two shows.

Starring:
Alan Tudyk plays the main character, Harry Vanderspeigle. The real Harry is a doctor who has a wonderful cabin right on the shores of the lake of the town. When the alien’s ship crash lands in the snow of the mountains, the alien comes across Harry’s cabin, kills him, and assumes his form. The ET is on Earth for a mission, which is to arm and detonate a doomsday device; as the galaxy is sick and tired of humans and their terminally toxic foibles. The plan was to land, arm the device, and leave. Now that the spacecraft is damaged and pieces are strewn that need to be found in the mountain snow, not to mention the doomsday device is also lost, it will take ET some time to fulfill his mission.

Sara Tomko plays Asta Twelvetrees. Asta is a nurse at Dr. Hodges, the town doctor’s, practice. As the story opens, we learn that Dr. Hodges has been found dead in his office. Asta was very close to Dr. Hodges. When Harry is enlisted by the mayor to fill in for the deceased doctor until a replacement can be hired, Asta and Harry get acquainted with each other. Thankfully, Asta is a very open-minded and accepting person, as Harry is one hella odd duck. Asta’s dad runs the town’s restaurant. She has relationship and other family issues that are often plot lines.

Corey Reynolds plays Sheriff Mike Thompson, who has given himself the nickname, “Big Black,” which is both ironic and funny as hell. Sheriff Thompson is an egotistical but lovable person who, as one of the few black people in the town, has to make sure he is nobody’s fool because he’s representing. Sheriff Thompson’s sidekick, Deputy Liv Baker, played by Elizabeth Bowen, is just that to him, a sidekick. Deputy Baker is never taken seriously by him and is often verbally abused by the sheriff. All Deputy Liv wants is to be taken seriously as a law enforcement officer. She’s got real skills, but nobody seems to notice them.

Alice Wetterlund plays D’Arcy Bloom, who is a bartender who once was a contender for an Olympic medal in some winter sport until she got a terrible injury that brought her back to her hometown. She and Asta grew up together and are best besties. D’Arcy develops a terrible crush on Harry once he’s on the scene and is willing to take a lot of unwitting insensitivity on Harry’s part (or should I say the alien in Harry’s form, who knows nothing about social cues of humans.)

Levi Fiehler plays Mayor Ben Hawthorne, who is benevolent, yet often out of his depth, especially when dead bodies start turning up here and there. He does act decisively in appointing Harry as the interim doc. How could he know that Harry is an ET in human clothing? Ben is married to Kate, played by Meredith Garretson, who is loving wife and mother with an inquisitive mind. Ben and Kate’s young son (I think he’s around 10 years old,) Max, is played by Judah Prehn. We learn that Judah is one of that rare percentage of humans who is able to see what the ET who is camoflaged as Harry really looks like. Of course he freaks out the first several times he sees him. He does his best to convince others in the town of what Harry really is, but everyone thinks it’s his overactive imagination. Much of the plot of the first season revolves around Max proving to others that Harry is an ET and Harry trying to kill Max (although not all that seriously. This is a comedy, after all.)

Gary Farmer plays Dan Twelvetrees. Dan is Asta’s father and owner of the town’s cafe. Dan raised Asta as a single parent and did a good job of it. The cafe is a frequent meeting place for the main characters.

The rest of the cast are good also, but in describing them I might give away important plot points.

Synopsis: The show revolves around ET/Harry learning how to pass as a human until he can get his ship reassembled, find the doomsday device, and head back to his home planet. In the meantime he has to keep people from believing Max. As Harry integrates into his community there are ongoing funny situations and other events that arise that keep things entertaining.

Impressions: There is a lot to like about, “Resident Alien.” Foremost is Alan Tudyk as Harry/ET. He’s already got a sort of strange look, and his range of odd and goofy expressions are impressive. He knows just how to play this character to bring him to life. I truly adore the two female leads, Asha and D’Arcy. They are both strong women who have been through significant challenges, yet they came through and are there to be supportive community members in their little town. I also adore the interactions between Sheriff Mike and Deputy Liv, which make for a lot of funny scenes. I also think Mayor Ben is one of the better roles. Not only is there a lot of material for him as mayor but there are multiple family situations that show up over the season; most significant is how he and Kate deal with Max when he insists that Harry is an ET. Speaking of Max, he is simply wonderful as the sharp-minded kid who isn’t going to be outwitted by some old ET. I’ve already talked about the setting. The plots are slow-paced and creative. The humor is pervasive and often dark, yet there are some dramatic and poignant moments dispersed along the way.

This was first published on Max’ Power Pop Blog.