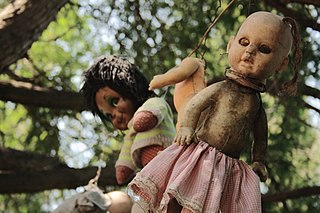 Luis was haunted by nightmares every time he closed his eyes. Most times he was running through a dark forest and being chased. The bomb shelter was stocked with food, water, and other essentials for five years for one person. The monster fed on him every other day. He’d certainly eat more as he was drained. It made him wonder how long they’d be in this place that once meant survival to him but now meant a prison and almost certain death. What was even worse was how she probed his mind. She was looking for something. It was a dark stone mask with large, almond-shaped crystal eyes. It wasn’t like anything they had at the warehouse, which the monster must have discerned through her clawing through his memories. It didn’t stop her from shredding what was left of his sanity. Sometimes she paused as if distracted by things outside of the shelter. He guessed she was astral projecting to search for it. One time her body seemed to stiffen and she appeared to be listening.

“I’ll be there by Monday!” said Jean. Marty’s head was spinning. Jean had updated him on the meeting. She’d also realized there were only a few weeks left in the semester; and then a two-week break until the next one. There was no reason she shouldn’t come to Mexico City. Marty was ambivalent. Of course he wanted to see his beloved, hold her in his arms, and sleep wrapped in hers again. Another part of him felt it was madness to encourage her to fly right into the arms of grave danger. But he knew that Jean didn’t need any encouragement and nothing he could say would deter her. She gave Marty the name and number of the Special Forces contact, which he planned on calling right after he finished talking with her.

“I’ll ask Tio and Tia if you can stay here with me, in my room. You’ll love them and my Primo, Fonz, and I don’t want to hear a word from you about how handsome he is!”

Jean laughed, relieved that Marty was not trying to dissuade her from coming. He knew her too well. “Do you want any souvenirs from Egypt?” She already planned on bringing the extra owl amulets for him and his family.

“I’ve always wanted a lapis lazuli scarab for a paperweight. Can you get one of those for me?”

Marty explained how he’d gotten Machete’s number and gave him the lowdown on what had happened at Gomes’ house.

“How long ago was that?” asked Machete.

“A couple of hours ago.”

“What’s your address? I’ll send agents to come over now to meet you and will arrange security around the perimeter and on the roof of your place. Whatever you do, for the moment, don’t leave the house and tell your family the same thing. Depending on the layout, we may want to move you all to a more secure location.”

Marty was anxious at the idea of being moved and at his family’s reaction once he told them. Also, Jean was arriving in the morning and how would she fit into Machete’s plan?

Marty gave him the address, then said, “My girlfriend, Jean, who was part of the team in Thebes, is flying here now and will be here in the morning.”

Machete was aware of this already but didn’t let Marty know. “Don’t worry, son, give me her arrival details and I’ll send some agents to meet her. We’ll get her to you safe and sound.” Machete would do as he promised, but what neither Marty nor Jean knew was that agents would be bringing both of them to a very important strategic planning meeting after picking her up. The more Machete and the other special agents knew going into this, the more chance of success they’d have in corralling the ET for public safety – and research – purposes. The call ended and Machete ordered agents to surround Luis Gomes’ property for surveillance but not too close to set off its telepathic warning sensors.