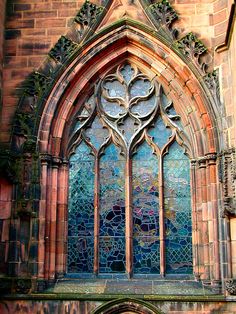 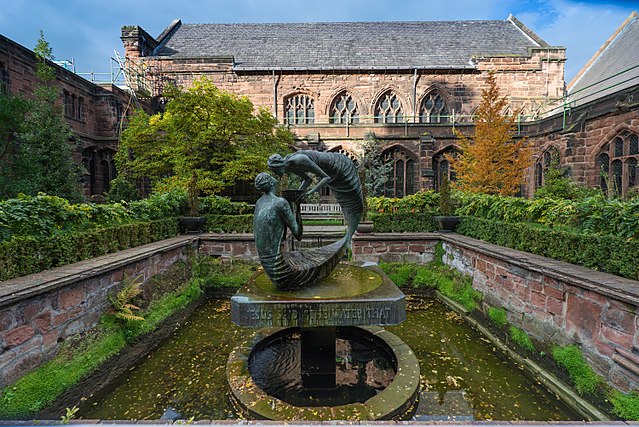 Water of Life [at Chester] Cathedral Sculpture by Broadbent (1994) to celebrate the 900th anniversary of the establishment of the Benedictine Abbey on this site.  Learn more here.  From the site:

The water feature depicts the encounter between Jesus and the Woman of Samaria, showing their shared bowl overflowing with water. The theme of water also suggests a link to how the Benedictine monks water supply was at the center of the cloister garden.

Close to a millennia has passed since Sir Hugh took his repast here on hallowed grounds. At the time, a young orphan lass was taken under Benedictine wings. She flowed like spring water from the mountains in her starched, unblemished robes. Each morning she and the sisters would travel to the springs to gather water to cook with and serve to the generous gentlemen benefactors . Sir Hugh’s one noble attribute was rising early (for a time;) yet it was only so he could catch a glimpse of the most lovely downcast eyes set in the most flawless of peach complexions in an oval-shaped face.

That oval of perfection haunted his waking moments and tormented him in dreams, where the lass whirled around him, her robes inflaming every nerve ending they touched. Sir Hugh’s state of mind became such that he knew not what was waking and sleeping. His appetite grew, yet no morsel of food could sate his hunger. His dreams became filled with demons who taunted him and laughed at his malady – until the night the demon, Pee-Wee, knelt at his feet.

“Sir, you shall have her if you must, but there is a price that must also be paid. Your soul may never leave these grounds, and you will be tormented by each beautiful untouchable living thing that passes by you forever. Your face will have a permanent smile but your insides will writhe in pain throughout your immortality.”

No sooner had Pee-Wee spoken than Sir Hugh woke.  He ran from his mansion to the stables and jumped on the fastest steed’s back, headed to the cathedral. His ham-sized fist boomed against the monastery door until a Sister let him in.

“Where is Young Charlotte?” he said in an even-toned voice.

“Sir Hugh, ’tis the middle of the night. What reason could you have?”

“I’m her father, and she needs to know.”

“Oh my! Shouldn’t we wait until morning?”

The Sister held her torch high as they climbed the wide, cool, stone steps to Charlotte’s chambers.

The torch faded to darkness as the Sister walked away.

Sir Hugh had his way with his daughter. In the morning the Sisters found her lifeless, bruised, and violated body, bloody in her bed. Above her, Sir Hugh, hung by his own belt, cold and dead.

He exists at the cathedral still, looking up skirts of choir girls, acolytes, and tourists.

A carving in Chester Cathedral.
Click here for more information.

There was something about the top image that made me want to know more about the cathedral.  I’ve mixed fiction with non-fiction and turned the monks into nuns.  No offense intended to the actual places or people who have inhabited this place over the ages.

Carrie is the host of The Sunday Muse.