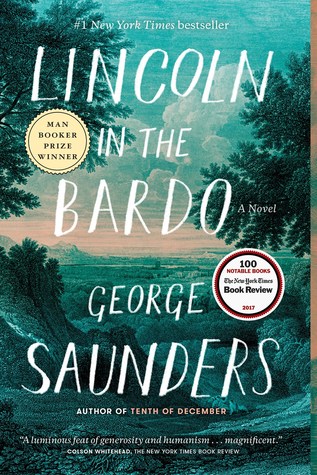 “His mind was freshly inclined toward sorrow; toward the fact that the world was full of sorrow; that everyone labored under some burden of sorrow; that all were suffering; that whatever way one took in this world, one must try to remember that all were suffering (none content; all wronged, neglected, overlooked, misunderstood), and therefore one must do what one could to lighten the load of those with whom one came into contact; that his current state of sorrow was not uniquely his, not at all, but, rather, its like had been felt, would be felt, by scores of others, in all times, in every time, and must not be prolonged or exaggerated, because, in this state, he could be of no help to anyone and, given that his position in the world situated him to be either of great help, or great harm, it would not do to stay low, if he could help it.”
― George Saunders, Lincoln in the Bardo

Bardo, a very simple definition:  a conscious state after death.

George Saunders was on Stephen Colbert recently. I’d never heard of him before, but I was so impressed with their dialogue that I sought out one of his books.  This one was randomly chosen to borrow from the inter-library loan system.

I was confused at the formatting at first, and when I flipped through the pages and realized the whole book was so formatted, I almost put it down. I am so glad I didn’t! Once I got into the swing, and realized the purpose of it, the confusion vanished.

You can read the synopsis elsewhere. Willie Lincoln, Abraham’s young son that died at around ten, is ostensibly the protagonist; yet he is little more than an incidental, but at the same time driving force in the plot, much as oxygen is the driving force of aerobic life forms. Abraham the father is also rather incidental in the book’s plot, yet but in the process is examined as a real, live, human being who once lived as a pivotal figure in American history.

The players in the other realm (the bardo) are who really hold the readers’ attention. I defy any reader to say they do not recognize themselves in one or more of them.

Creativity, confidence in manifesting human behavior on the page, and generosity of heart encapsulate Saunders’ writing.

I think I’m a winner for paying attention to Mr. Saunders in his Colbert appearance, for seeking out one of his books, and for randomly choosing this one. The rest will now domino as having been read along the way.