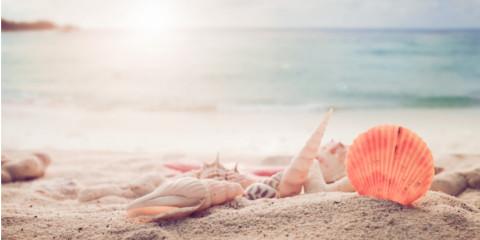 It is Paula’s first time at the helm with the  Three-things-challenge .  She has given us these three words to build a story:

After her morning yoga at the beach, Betty decided to take a walk down the shore. As Betty was a craftsy sort of person, she was always on the lookout for nature’s finest materials for her creations. As she walked along she noticed seashells of an unusual shade of pink, which she put into her beach bag. A couple of blocks down the shore, she saw a bright blue bottle bobbing in the surf. She waded out and nabbed the bottle. There was a letter in it, which said, “make a wreath with the pink shells.” Betty looked around, was this some kind of candid camera or punk’d episode? There was no one in sight.

Betty took the bottle and the shells home. She set the bottle on the counter near the sink to wash and set the shells to to soak. Once they were washed and dried, she set them on her craft table for the next day.

In the morning, Betty took a closer look at the shells. They had strange squiggles on them she’d never seen before. What’s even stranger is that there were holes along the edges as if they were meant to be woven together into a wreathe. Betty pulled out her box of driftwood and thin twine as well as some dried flowers she had. Her creative spirit took over and soon she was looking at a true work of art.

Now that Betty had made the wreath, what was she supposed to do with it? She went to the mirror near the door and tried the wreath on. It looked so mystical and beautiful, like something a mermaid would wear.

As she was admiring herself and her creation in the mirror, movement behind her caught her eye. In the reflection of the mirror, she could see the blue bottle on the counter was glowing! She turned around and immediately thought the sun must be catching it just right, as it was near the window. She walked over and looked closely. No, the light was coming from within the bottle. It wasn’t a light, more of a hologram of a mermaid, on a rock near the ocean. The mermaid was speaking to Betty telepathically and saying, “bring the wreath to the rock near the lighthouse.”

Betty wondered if she was losing her mind. She also felt compelled to do what the mermaid said. She hopped in the car and took the bottle and the wreath with her, heading for the lighthouse. By the time she got there, the sun was on its way to setting but it was still light enough for her to see. As she approached the lighthouse, she saw a figure on the rocks: the mermaid! For some reason, Betty did not feel afraid. The mermaid seemed familiar, like someone she used to know. The mermaid smiled and said, “I knew I could count on you.”

Betty held out the bottle and the wreath and the mermaid took them. The mermaid said, “Now my daughter has everything she needs for her wedding. Thank you, Betty.” With that, she slipped into the water and was gone.

One thought on “Three Things Challenge”