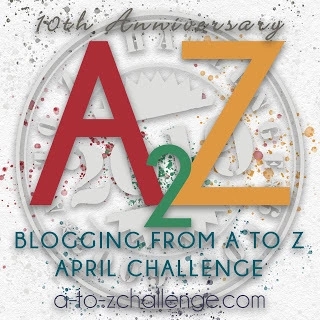 Welcome to Day 26 of the A2Z 2019 Challenge. It’s been quite the ride. I’ve enjoyed researching for my entries. I’ve also enjoyed surfing others’ blogs for their entries. I’ve made a few friends along the way. I do plan on participating again next year. For anyone who did not participate, I would encourage you to think about doing it. For anyone who did participate, what did you like best? What did you like least?

The Z entry for today is Ziggurat. A ziggurat is a type of massive structure built in ancient Mesopotamia. It has the form of a terraced compound of successively receding stories or levels. According to Herodotus, at the top of each ziggurat was a shrine, although none of these shrines have survived. One practical function of the ziggurats was a high place on which the priests could escape rising water that annually inundated lowlands and occasionally flooded for hundreds of kilometers. Another practical function of the ziggurat was for security. Since the shrine was accessible only by way of three stairways, a small number of guards could prevent non-priests from spying on the rituals at the shrine on top of the ziggurat, such as initiation rituals like the Eleusinian mysteries, cooking of sacrificial food, and burning of carcasses of sacrificial animals. Each ziggurat was part of a temple complex that included a courtyard, storage rooms, bathrooms, and living quarters, around which a city was built.

The people of ancient Mesopotamia practiced a religion that modern scholars are only just now beginning to understand and the physical focal point of their religion were the ziggurats. Ziggurats were important for a number of reasons: they served as a way for the people to connect to their most important gods, they provided a focal point for the secular community, and they also acted as a visible and tangible sign of a king’s power. Any king worth his salt in ancient Mesopotamia had to build a ziggurat that could be seen for miles around, which would ultimately serve to immortalize him for posterity. The structures were believed to be the earthly home of the god or goddess for whom they were dedicated. Ziggurats were part of larger temple complexes where young men would study in scribal schools and some of the world’s first astronomers observed the celestial bodies.

UR
The earliest ziggurats were built by the Sumerians in the third millennium BC. At that time, Mesopotamia was essentially divided into several independent and often competing city-states until the Third Dynasty of Ur was established by Ur-Nammu (ruled ca. 2112-2095 BC). Ur-Nammu unified the region through force, but then set about to legitimize his rule, and that of his dynasty, through a variety of measures, one of which was the construction of the Ziggurat of Ur. The ziggurat was dedicated to the moon-god and stood at the center of a massive temple complex that dominated the city of Ur. The size of the Ziggurat of Ur was so much more massive than any of its predecessors – its base measures 190 by 130 feet and although only two levels remain today, scholars believe that there was once a third level.

Ziggurat of Ur staircase

Dur-Kurigalzu in Babylonia
One of the more impressive ziggurats was built by a Kassite king named Kurigalzu I (reigned sometime in the early fourteenth century BC) in a newly founded city. The name of the city was Dur-Kurigalzu (“Kurigalzuville”), which was located in the northern area of Babylonia. The ziggurat formed the center piece in a large palace and temple complex, much like its predecessors in southern Mesopotamia. The construction of the city of Dur-Kurigalzu on virgin soil and the accompanying ziggurat were meant to appease the Babylonian god Marduk, no doubt, but also to legitimize the reign of the enigmatic and poorly documented Kurigalzu I.

Al-Untash-Napirisha
The Elamite kings followed the precedent established by the Sumerian and Babylonian kings by building ziggurats for their primary gods and as a way to legitimize their dynasties. In a move similar to that of Kurigalzu I, the Elamite king Untash-Napirisha (ruled ca. 1340-1300 BC) founded a new city named after him – Al-Untash-Napirisha – with a large ziggurat being the centerpiece. The ziggurat was dedicated to two gods: Napirisha, the primary god of the Elamites and Inshushinak, the patron god of Susa. Millions of mud clay bricks were stacked in several rows to make the Ziggurat of Al-Untash-Napirisha, which not only made it one of the largest, but also one of the best preserved ziggurats in history.

Most of the major Assyrian cities had ziggurats, which were dedicated to their primary deities – Assur and Ishtar – but also served as a visible reminder of Assyrian supremacy in the region. Assurnasirpal II (ruled 853-859 BC) chose to build his ziggurat in the city of Nimrud.

Sargon II’s (reigned 721-705 BC). Like Kurigalzu I in Babylon and Untash-Napirisha in Elam, Sargon II commissioned a new city to be built, Dur-Sharrukin (“Sargonville”), in order to impress the gods as well as his friends and foes. The city was enclosed by a brick wall and the royal palace and the temples, including the ziggurat, were enclosed by yet another wall. Moderns scholars believe that the Ziggurat of Dur-Sharrukin stood 143 feet high and had up to seven different levels. The Ziggurat of Dur-Sharrukin represented a change in ziggurat building style as it was connected directly to the royal palace. The reason for the ziggurat’s connection to the royal palace was related to the increased ritual duties of the Assyrian king, who was the high priest of their religion as well as the commander in chief of their armies.

The culmination of centuries of ziggurat construction took place during the reign of Nebuchadnezzar II (ruled 604-562 BC). Nebuchadnezar II is known to many as a “bad guy” from the Old Testament book of Daniel, but he was actually a very active king who led a new dynasty, referred to as the Neo-Babylonian Dynasty, to prominence in the Near East. The crowning achievement of Nebuchadnezzar II’s reign was the construction of the Etemenanki Ziggurat in Babylon. Etemenanki is translated from ancient Akkadian as the “House of the Frontier between Heaven and Earth,” which again demonstrates the connection between ziggurats and the heavens. The ziggurat was dedicated to Marduk, who was the patron god of the city of Babylon. 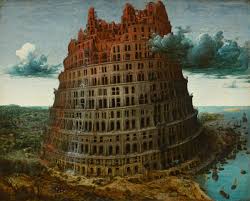 Etemenanki Ziggurat, later known as The Tower of Babel,

as painted by Pieter Brugel the Elder around 1568

Differences between Ziggurats and Pyramids
Today, many people like to compare ziggurats – which is derived from the ancient Akkadian word for the structures, ziggurratu – with their counterparts, the pyramids, in Egypt. Although both pyramids and ziggurats were constructed during the same time period, they served different functions and were built using different methods and from different materials. Ziggurats were also built over a much longer period than Egyptian pyramids and most importantly, ziggurats were built by a plethora of different people who inhabited ancient Mesopotamia. Mesopotamia, unlike Egypt, was full of disparate and at times warring ethnic groups, but they all followed a similar religion and built ziggurats to appease their gods and as signs of temporal power.