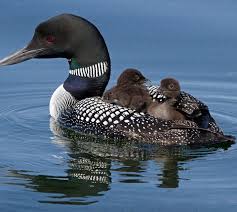 It was this time of year a few years ago when I decided to kayak around Emerald Lake. As I randomly explored some of the many inlets and small offshoots of the lake I heard a loon‘s call of distress nearby. Following the call, I found the pair, the brood of babies resting on their father’s back as he hovered near Mother Loon. It was she making the call.

I could see even from where I was that there was a fishing line dangling from her mouth. My heart sank, as I knew that the (illegal now) lead sinkers attached to them would lie in her gullet and kill her within a matter of weeks.

Having worked with ornithologists during my internship with the State DNR, we’d trapped, recorded, and banded several species of water birds in small inland lakes in MI, so I knew what to do. As loons have well-defined territories, I knew I’d be able to find them when I came back. I paddled to shore, hopped in the car, and headed to the fish market for fresh herring, one of the loon’s favorite foods, then headed to the DNR station that blessedly was nearby. I updated the ranger on the circumstances and she brought the tranquilizer to put in the herring and a pair of pliers.

We kayaked back to the inlet where I’d seen her before. Her family was still huddled around her. Her call was now silent which worried both the ranger and I. There was no telling how long that killer lead sinker had been in her gullet. Maybe we were too late.

We jumped out of the kayak and I acted as barrier between Father Loon and the brood and Mother Loon. Father Loon was torn between protecting his offspring and protecting his lifelong mate. He became agitated, sounded the alarm call, and swam erratically.

Meanwhile Ranger Jones loaded the tranq into the herring. Mother Loon must have been starving as she gobbled the herring. Ten minutes later she was unconscious in the reeds. Ranger Jones held her at the right angle and grasped the fishing line with the pliers and pulled ever-so-gently. There was no resistance which was a miracle in and of itself. If there had been we would have had to take Mother Loon to the wildlife veterinarian sixty miles away. Pulling slowly, Ranger Jones at last saw the lead sinker and a hook that was wrapped with green stuff that disabled its hooking ability.

Jones and I laid Mother Loon on the reeds on shore and walked back to near the kayak. We watched Father Loon and the brood swim to their loved one. We waited until she awoke and was able to swim; then we started paddling back to the car.

“Why don’t the fishermen here honor the ban on all lead fishing tackle? Don’t they realize how quickly it can kill loons and other creatures who ingest it?,” I asked Ranger Jones.

“My guess is that they just don’t know it does. I wish they would turn in the lead sinkers to us, as we give them free replacements of safe sinkers that work just as well.”

Please take a moment to learn about this VERY REAL THREAT TO LOONS AND OTHER BIRDS here. and here.

Fandango’s FOWC is random, the Word of the Day Challenge is brood, and Paula’s 3 Things (welcome back, Paula!) challenge words: emerald, herring, pliers