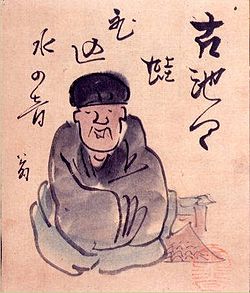 The haiga was written in honor of Matsuo Basho, whose painting here inspired me, as the characters look like falling leaves.

Haiga is a Japanese concept for simple pictures combined with poetry, usually meaning haiku. In Basho’s time, haiga meant a brushed ink drawing combined with one of his single poems handwritten as part of the picture. … Sometimes the poem is handwritten or it can be computer generated, depending on the artist’s taste.

Image information:
Portrait of Matsuo Bashō by Yokoi Kinkoku, c. 1820. The calligraphy relates one of Bashō’s most famous haiku poems: Furu ike ya / kawazu tobikomu / mizu no oto (An old pond / a frog jumps in / the sound of water).