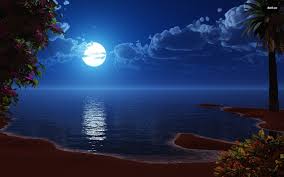 “The sun goes down the night rolls in
You can feel it starting all over again
The moon comes up and the music calls”
–from Glenn Frey’s, “You Belong to the City”

She tries not to think about how long ago it was. That night when everything changed. If only she hadn’t fallen asleep on the beach. Try as she might to shake the images, even after a hundred years, whenever her mind wandered in that direction it started playing in her head like a film reel. Waking to a sharp pain in her leg. Her reaching down before opening her eyes to feel something large, cold, and slimy weighing on her leg. Opening her eyes, she saw what looked like a giant frog, dark and dull in the full moon’s light but whose eyes and teeth glimmered with a yellow sheen.

The “frog” quickly jumped back into the water as her lightheadedness caused her to fall back onto the blanket. Her hand returned to where the pain was radiating. She felt two sticky holes in her skin just above the ankle on the side of her lower calf. Nausea, either at feeling the wounds or because of some poison that had been injected into them, overwhelmed her. Vomit poured from her and pooled in front of her on the blanket, which made her wretch even more. Head spinning, she knew she had to get to the emergency room. Throwing her sunglasses, lotion, book, and phone into the beach bag and tossing the blanket into a garbage drum, she staggered to her car.

Within minutes she was registering at the hospital; she was wheeled into an examination cubicle within minutes and helped up onto a table. The nurse asked where the bite was at and she pointed. The nurse lifted her leg and looked.

“There’s no bite wound that I see, Miss.”

Looking down, she was confused as her leg looked intact.

“What? That can’t be. I felt it bite. I saw and felt it on my leg then watched it jump back into the water. I’ve been retching and lightheaded.”

“Miss, please lie down. The doctor will be in soon.”

The nurse took her vital signs and left.

The doctor was unfazed after all was told. An older gentleman with a calm demeanor about him, he said, “Yours isn’t the first time I’ve heard or seen such a thing. I came across it a few times when I was a military doctor in other countries. Unfortunately nobody to my knowledge and experience has figured out what it was.”

The doctor helped her to sit up, then he discharged her.

“If you get any symptoms, please call your family doctor.”

A month went by with no symptoms. But, like all of the old legends of werewolves, when the full moon came, she understood nothing would ever be the same. 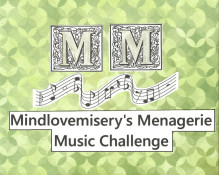 Jim Adams is the creative host of Mindlovemisery Menagerie’s Music Challenge.  Jim says:
The challenge today is to focus on [“You Belong to the City”] and use it for inspiration in any form of creative expression.