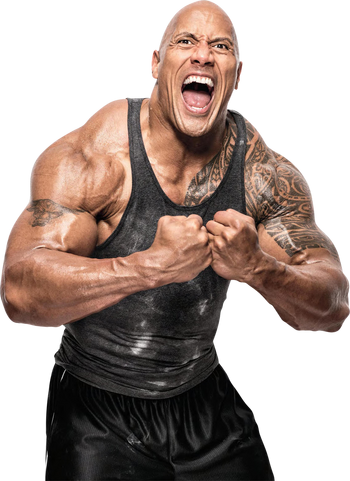 The Rock, a.k.a. Dwayne Johnson was there when professional wrestling went from two chubby, hairy guys wearing unitards to tanned muscular bodies wearing glittery spandex. From 1996-2004, Dwayne glammed and glitzed the crowds with his magnificent form, his skilled moves, and his charisma — before leaving for Hollywood.

WWE languished without its star and Johnson was enticed to return in 2007. Ratings soared.

In 2016, WWE’s wrestlers began wearing swastikas and confederate flags – and the scripts called for these wrestlers to win.

Johnson was called in to management, who said, “You’re contract is up. There will be no renewal. Our partners are taking another direction.”

They wouldn’t say who the partners were.

That night when The Rock got into the ring, all ears heard:

“The Rock cries out to [you] today. You may stand upon me, but do not hide your face.”

Frank J. Tassone is today’s host for dVerse.  Frank says:
include this line from that poem using 144 words or fewer (excluding title) that includes the line in our prose:

The Rock cries out to us today, You may stand upon me, But do not hide your face.

Image and a lot of information about The Rock is found here.

Note:  Part of this story is fiction and part is not.