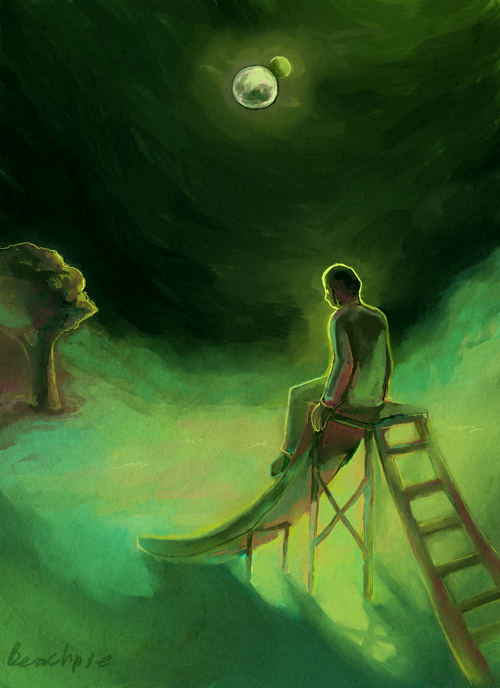 I finished Murakami’s three-volume, 1,300+-page story this week. It was read in its entirety using Kindle’s program for PC. Although I’m firmly in the corner of hard copy books, I learned a new appreciation for reading e-books. The ability to highlight passages in different colors and store them in the attached “notebook” was immensely appreciated with a series of this size with so very many highlightable passages. The copies I’ve read from are library borrows and I wondered what would happen to the highlights after the book returns. Why, they are stored and able to be accessed, copied, and put into saveable word processing documents.

I copied all of the highlighted quotes from all 3 books, then I pulled out the ones that don’t give away any spoilers from just the first book for this post.

1Q84 is the name of the epic novel by Haruki Murakami, originally published in Japan in May, 2009 and first published in English in 2011. It has been translated from Japanese to English by Jay Rubin and Philip Gabriel. In the first two volumes the chapters are alternately focusing on Tengo, a 30-year-old male cram school math teacher and budding writer and Aomame, a 30-year-old female personal trainer at a health club for the wealthy. Each of the characters are unwittingly pulled into what can only be described as an alternate reality or alternate world. Each character travels through in parallel, and in many respects similar quiet lives of solitude. As the story moves on, their lives are revealed to intersect in past, present, and future, both in the real world and in the alternate world.

The last volume’s format introduces another character, Ushikawa, a private detective that has been hired to find both of them. Ushikawa is different than the two young people but he shares a similarity of self-sufficiency and solitude with them. Ushikawa chapters join the rotation with Tengo’s and Aomame’s.

It is important to note that most of the story is quite mundane and full of the daily activities of living. This lulls the reader into a state somewhere between feeling safe and feeling edgy. When mind-bending things happen there is a feeling of being a helpless witness, which breeds a certain level of dis-ease afterwards. There are disturbing sexual images that are difficult to shake out of your mind. There are ominous portrayals of cults and those who practice as cult members.

Although the main characters are mostly in solitude, they are in sporadic interaction with colorful characters of depth. These interactions brighten the story and lend it refreshing texture.

I have a strong impression that 1Q84 is about much more than what is on its surface. It seems to have been pulled from somewhere deep in the collective unconscious and brought to the surface for our education and enlightenment. For that, I thank Mr. Murakami.

Again, the following quotes are all non-spoilers and only from the first book.

He never said a great deal , and he hated long – winded explanations , but when necessary he could present his views logically and precisely . He could also be quite caustic if he felt like it , aiming a quick and merciless jab at his opponent’s weakest point . He had very strong opinions about both people and literature ; the works and individuals he could not tolerate far outnumbered those he could . Not surprisingly , the number of people who disliked him was far greater than those who thought well of him — which was exactly what he hoped for . Tengo thought that Komatsu enjoyed the isolation — and even relished being openly hated . Komatsu believed that mental acuity was never born from comfortable circumstances .

over the centuries . Curses played a major role in ancient communities . They had made up for the gaps and inconsistencies in the social system . It seemed like an enjoyable time to be alive .

Tengo said , “ When I’m writing a story , I use words to transform the surrounding scene into something more natural for me . In other words , I reconstruct it . That way , I can confirm without a doubt that this person known as ‘ me ’ exists in the world . This is a totally different process from steeping myself in the world of math . ” “ You confirm that you exist , ” Fuka – Eri said .

“ Did you ever experience bullying when you were a child ? ” Tengo thought back to his childhood . “ I don’t think so , ” he answered . “ Or maybe I just never noticed . ” “ If you never noticed , it never happened . I mean , the whole point of bullying is to make the person notice it’s being done to him or her . You can’t have bullying without the victim noticing . ”

“ Is it possible to become friends with a butterfly ? ” “ It is if you first become a part of nature . You suppress your presence as a human being , stay very still , and convince yourself that you are a tree or grass or a flower . It takes time , but once the butterfly lets its guard down , you can become friends quite naturally . ”

Many long months and years seemed to have passed since the room had made up its mind never to welcome any visitors .

What he had always had in mind was the potential of a revolution — revolution as a metaphor or hypothesis . He believed that exercising that kind of antiestablishment , subversive will was indispensable for a healthy society .

“ Age has nothing to do with it , ” Aomame snapped back . “ It’s a question of how you live your life . The important thing is to adopt a stance of always being deadly serious about protecting yourself . You can’t go anywhere if you just resign yourself to being attacked . A state of chronic powerlessness eats away at a person . ”

“ My specialty is cultural anthropology , ” the Professor said . “ I gave up being a scholar some time ago , but I’m still permeated with the spirit of the discipline . One aim of my field is to relativize the images possessed by individuals , discover in these images the factors universal to all human beings , and feed these universal truths back to those same individuals . As a result of this process , people might be able to belong to something even as they maintain their autonomy . Do you see what I’m saying ? ”

This was not about the mere loss of her virginity but rather the sanctity of an individual human being’s soul . No one had the right to invade such sacred precincts with muddy feet . And once it happened , that sense of powerlessness could only keep gnawing away at a person .

He walked down the gigantic building’s twisted corridor , opening one numbered door after another . Each time a new spectacle opened up before him , the ugly traces of the real world would dissipate and then simply disappear . The world governed by numerical expression was , for him , a legitimate and always safe hiding place . As long as he stayed in that world , he could forget or ignore the rules and burdens forced upon him by the real world .

Where mathematics was a magnificent imaginary building , the world of story as represented by Dickens was like a deep , magical forest for Tengo . When mathematics stretched infinitely upward toward the heavens , the forest spread out beneath his gaze in silence , its dark , sturdy roots stretching deep into the earth .

The role of a story was , in the broadest terms , to transpose a single problem into another form . Depending on the nature and direction of the problem , a solution could be suggested in the narrative . Tengo would return to the real world with that suggestion in hand . It was like a piece of paper bearing the indecipherable text of a magic spell . At times it lacked coherence and served no immediate practical purpose . But it would contain a possibility . Someday he might be able to decipher the spell . That possibility would gently warm his heart from within .

But pure , unadulterated feelings are dangerous in their own way . It is no easy feat for a flesh – and – blood human being to go on living with such feelings . That is why it is necessary for you to fasten your feelings to the earth — firmly , like attaching an anchor to a balloon . The money is for that . To prevent you from feeling that you can do anything you want as long as it’s the right thing and your feelings are pure . Do you see now ? ”

The moon had been observing the earth close – up longer than anyone . It must have witnessed all of the phenomena occurring — and all of the acts carried out — on this earth . But the moon remained silent ; it told no stories . All it did was embrace the heavy past with cool , measured detachment . On the moon there was neither air nor wind . Its vacuum was perfect for preserving memories unscathed . No one could unlock the heart of the moon . Aomame raised her glass to the moon and asked , “ Have you gone to bed with someone in your arms lately ? ”

Without a doubt , this woman has been enveloped by a form of madness , thought Aomame . But she herself is not mad or psychologically ill . No , her mind is rock steady , unshakably cool . That fact is backed up by positive proof . Rather than madness , it’s something that resembles madness . A correct prejudice , perhaps . What she wants now is for me to share her madness or prejudice or whatever it is . With the same coolheadedness that she has . She believes that I am qualified to do that .