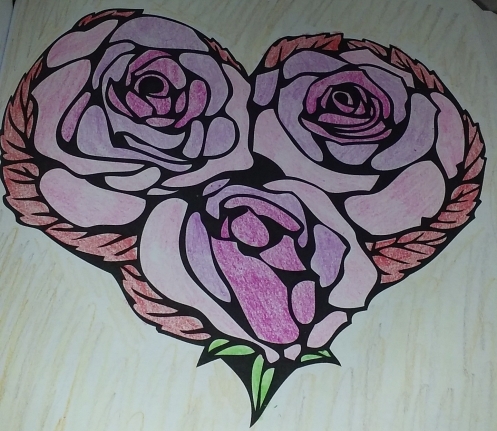 I’ve been trying to decide what angle to approach Valentines Day in my writing today. Valentines Day is a iconic celebration of love between two people. Not everyone has the blessings of being in reciprocal love with another person. It’s difficult not to feel like you’re missing out on this day if you don’t have that special someone. I decided to highlight three perspectives on love through musical selections.

We are There
The first one celebrates the blessed, the ones who have found their soul mate and are sharing fancy dinners, toasting to love, and snuggling up later by candlelight.

The song that has touched my heart in that world is Pearl Jam’s, “Thin Air,” sung by Eddie Vedder, written by Stone Gossard. It’s a simple little song that sings of the shared intimacy that comes with true love. The artwork for the album it comes from is also expansive and cosmic, which is an aperture that shifts with love’s many feelings and perspectives within itself.

The music on the album featured an experimental sound, evident on songs that used binaural recording techniques. The atmospheric tracks, mostly featuring somber lyrics dealing with social criticism, led the band to convey these themes with images of nebulas in the album artwork. Binaural received positive reviews, and debuted at number two on the Billboard 200. Although the album was certified gold by the RIAA, it became the first Pearl Jam studio album to fail to reach Platinum status in the United States.

Binaural’s cover art is a modified Hubble Space Telescope photo of the planetary nebula MyCn 18, popularly known as the Hourglass Nebula. Hubble Space Telescope photos of the Helix Nebula and Eagle Nebula are also featured in the inside cover and liner notes for this album, respectively. The photos were used with the permission of NASA. Regarding the artwork, Ament said, “The reason that we went with Tchad [Blake] is because he provides an amazing atmosphere to songs….So, I think we wanted the artwork to represent that….One of the themes that we’ve been exploring…is just realizing that in the big scheme of things, even the music that we make when we come together, no matter how powerful it is, it’s still pretty minuscule. I think for me the whole space theme has a lot to do with scale. You know, you look at some of those pictures, and there are thirteen light years in four inches in that picture.”

Hesitate, when I feel I may do harm to her,
Watch it all, cause this feeling we can share.

And I know she’s reached my heart, in thin air.

Byzantine is reflected in our pond,
There’s a cloud, but the water remains calm,
Reaching in, the suns fingers clutch the dawn to pass,
Even out, it’s a precious thing to bear.

It’s not in my past to presume,
Love can keep on moving in both directions.
How to be happy and true,
Is the quest we’re taking on together,

There’s a light, when my baby’s in my arms,

We Were There
The second one focuses on love lost but not forgotten. I listened to Gordon Lightfoot’s “Old Dan’s Records” this morning and came across a new song for me, but one that speaks to how I feel today, about a lost love. Maybe one day these feelings may fade but today is the focus. To those reading who have been blessed with love with another and then lost it, this song is for you (and me) today.

Old Dan’s Records is Canadian singer Gordon Lightfoot’s ninth original album, released in 1972 on the Reprise Records label. The album reached #1 in Canada on the RPM national album chart on November 5, 1972, and remained there for three weeks. In the U.S., it peaked at #95 on the pop chart.

The album marks a continued evolution in Lightfoot’s sound as he begins to add country influences to his standard folk sound with the help of the banjo, dobro and steel guitar. Lightfoot would continue to use these country influences in his music until the early 1980s.

Despite its 1972 year of initial release, the album was nominated for and won the 1974 Juno Award for “Folk Album of the Year”. Lightfoot also won a Juno that year as “Folk Singer of the Year”.

“That Same Old Obsession” is the song I chose for today.

I come to this garden, I come here to rest
Early each day upon rising
I think of my lost love from over the sea
And sometimes I’ve wondered, if she thinks of me

I long to recall every kiss, every kind word
I miss her so much I could die
But the creatures of evil have captured her heart
And that same old obsession still keeps us apart

I come to this garden, I come here to rest
Just as the night comes stealing
Someone is weeping, I’m calling her name
Deep in the garden, deep in my brain

Let’s Doit
If a person doesn’t have a Mr./Mrs./Ms. Right, one way the holiday can be celebrated is with a Mr./Mrs./Ms. Right Now. I was trying to think of a song that could give oomph to the fleshly urges, and one that popped out for me was from an album I totally forgot I had but had listened to until the grooves were melted when I first got it and for a long time afterwards. No bloggers that I know have covered this album and its unpronounceable name may have harmed it in some way, but if you want to get your pheromones supercharged, this whole album is electrifying. It is one I’ve danced my booty off to around the house innumerable times. I’m not sure who is singing the rap part of the song, but ooh la la! If anyone can find out who he is, please let me know.

Love Symbol is the fourteenth studio album by American recording artist Prince, and the second of two that featured Prince’s backing band the New Power Generation. It was released on October 13, 1992 by Paisley Park Records and Warner Bros. Records. It was originally conceived as a “fantasy rock soap opera” with various spoken segues throughout (with its storyline becoming the basis for the direct-to-video film, “3 Chains o’ Gold”), and contains elements of R&B, pop, soul, funk, and rock styles.

“The Max” has one word in here that is written one way but is sung another. Let’s see if you can figure out what the word is.

Where are you?
You can relax now, the Max is in control
Go, yeah yeah

When my back is so far back it’s on the other side of the wall
When half a chance is all I get if I get a chance at all
When the going gets tougher than the tough can go
I grind the axe, that’s when I go, I go, I go to the max, I go

The max, Yo baby, tell me where the party’s at
The max, Yo baby, I want to shuffle the cards in that stack (I go)
The max, We can dance if you want to, but I might break yo back
The max, More funk for your buck you can bet on that

The max, yo baby (oh yeah), tell me where the party’s at
The max, yo baby, I want to shuffle the cards in that stack (oh, yeah yeah)
The max, we can dance if you want to (oh yeah), but I might break yo back
(to the max)
The max, more funk for your buck you can bet on that

When my body starts to shiver from the chill of
The scarlett sweat
When my lips eclipse the sun and the moon
Reflecting from the wet
When the blood of my love outraces
Every one of the stallions in your pack, that’s when
You go, you go, you go 2 the max. you go

Then listen,
When the going gets tougher than the tough can go
I grind the axe, that’s when I go, I go, I go 2 the max. I go

This is the max

Dear love, dear love, dear love
Forgive me for my sins
But you left me in such a cold cold world to suffer in (kick it)
And Contrary to popular belief
Even though one’s life is brief
If you go there once you
Come again and again and
Let’s go

This is the max
Songwriters: Prince Rogers Nelson