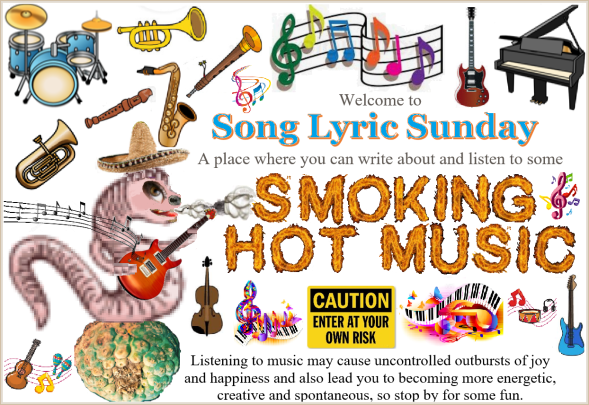 Jim Adams is the music aficianado host of Song Lyric Sunday.  Jim says:
This week we have Ankles/Hands/Feet/Fingers/Toes/Wrists and I think we will all be able to find a song that uses of these prompt words which can be singular or plural and we should all have fun while we are doing this.

Songs of Our Soil is the sixth album by the singer Johnny Cash. It was originally released in September 1959 and later re-issued on August 27, 2002 with two bonus tracks.

A majority of the songs involve dying. Death concludes “The Man on the Hill”, “Hank and Joe and Me”, “Clementine” and “My Grandfather’s Clock.” “Don’t Step on Mother’s Roses” is about a family losing their parents to death; first Mother, then Daddy. “The Great Speckled Bird” is a spiritual about the Second Coming of Jesus. “The Caretaker” is the story of a cemetery caretaker wondering who will mourn for him when his time comes. Even “Five Feet High and Rising” (“the hives are gone; I lost my bees”) and “Old Apache Squaw” (“…the next white man that sees my face is gonna be a dead white man”) mention death in some way. “I Want to Go Home” is a retitled version of the nautical standard “The John B. Sails”.

By his own admission, Cash was becoming fascinated by death during this time, in part due to his growing amphetamine and barbiturate dependence, and also due to the premature death of his brother. (On Saturday, May 13, 1944, Cash’s older brother Jack, at age 15, with whom he was close, was seriously injured in an accident at his job in a high school. He was pulled into an unguarded table saw while cutting oak into fence posts, and was almost cut in two. He died from his injuries a week later.)

“Five Feet High and Rising” is a first person account of the 1937 Mississippi flood that Cash, then aged four years and 11 months, endured with his family. They had to leave their home and flee.

The video is a double feature, with “Big River” following.

We can make it to the road in a homemade boat
That’s the only thing we got left that’ll float
It’s already over all the wheat and oats,
Two feet high and risin’

Well, the hives are gone,
I lost my bees
The chickens are sleepin’
In the willow trees
Cow’s in water up past her knees,
Three feet high and risin’

Hey, come look through the window pane,
The bus is coin’, gonna take us to the train
Looks like we’ll be blessed with a little more rain,
Four feet high and risin’

Well the rails are washed out north of town
We gotta head for higher ground
We can’t come back till the water goes down,
Five feet high and risin’

Now I taught the weeping willow how to cry,
And I showed the clouds how to cover up a clear blue sky
And the tears that I cried for that
Woman are gonna flood you Big River
Then I’m gonna sit right here until I die

I met her accidentally in St. Paul (Minnesota)
And it tore me up every time I heard her drawl, Southern drawl
Then I heard my dream was back Downstream cavortin’ in Davenport,
And I followed you, Big River, when you called

Then you took me to St. Louis later on (down the river)
A freighter said she’s been here but she’s gone, boy, she’s gone
I found her trail in Memphis, but she just walked up the block
She raised a few eyebrows and then she went on down alone

Now, won’t you batter down by Baton Rouge, River Queen, roll it on
Take that woman on down to New Orleans, New Orleans
Go on, I’ve had enough; dump my blues down in the gulf
She loves you, Big River, more than me

Now I taught the weeping willow how to cry, cry, cry
And I showed the clouds how to cover up a clear blue sky
And the tears that I cried for that
Woman are gonna flood you Big River
Then I’m gonna sit right here until I die
Songwriters: Johnny R. Cash / Johnny R. Cash