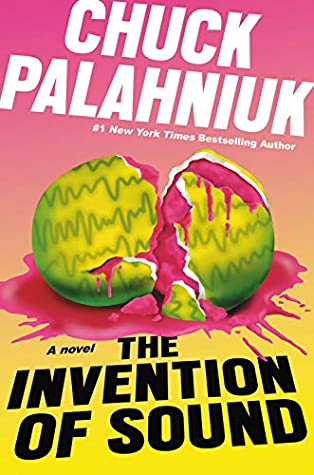 Every time I begin to read a new Chuck Palahniuk book, either consciously or not I wonder if it can live up to the mind-scrambling beauty of its predecessors. I also wonder if I will be able to show some self-restraint and be able to consume it at a reasonable pace in order to fully digest every nuance on a first read. Regarding, “The Invention of Sound,” published 9/8/20, the answers are yes and no. Only Chuck could have written this story; its inventiveness and inimitable execution could only have sprung forth from his mad genius. I held on to the book after getting it for a month or so, looking at its bright pink, green, and yellow cover with black and white lettering, which should count for something; however once I cracked that puppy open it was all over.

There are two main characters in, “The Invention of Sound.” The book is divided into three main parts, but it is not divided into chapters. It switches between the characters almost by surprise, by seeing the name of the other in the next paragraph. Parts one and two have the characters on their own trajectories, where the third has their stories converging, as is often the case in Chuck’s books. Tom Robbins says, “There are no throwaway sentences.” Likewise in Chuck’s books, there are no throwaway characters.  Pay attention to each new one that is introduced.

Mitzi Ives is a Foley Artist that has taken over the family business from her father. Foley Artists are responsible for sound effects in movies and music. Mitzi’s specialty, like her father’s was before her, is screams. The screams Mitzi produces and sells have made her a very wealthy woman. At the same time, the creation of the screams that movie producers want to buy come at a heavy cost to Mitzi’s soul.

Gates Foster is a “dad-shaped” office worker who has been on a seventeen-year mission to find his abducted little daughter, Lucinda. The loss of Lucinda is a burden he takes full responsibility for and what he devotes his every waking hour to correcting. A grief support group for those who have lost children helps, but Gates’ magnificent obsession can only be forgotten for small bits of time.

Anyone who knows Palahniuk books knows he writes transgressive fiction, a genre that dares to go where nobody has gone before. The readers will walk the networks on “the dark web” where predators seek to exploit children. They will walk with a Dexter-esque killer driven by an unholy rationalization. They will learn about the seedy underbelly machinations of Hollywood stars and star-makers. The reader will also learn the nitty-gritty of how all of those sounds in movies – and enhancements in musical recordings – happen.

Be prepared to dig in to this deliciously dark story that had this reader alternating between squeamishly pushing forward and laying a hand on her trembling heart while wiping tears away. Be prepared to mow through “The Invention of Sound” like a double-deluxe banana split. Chuck, thank you for what you do. I’ll follow you wherever you lead.