Update!  I have an app called TinEye that searches the internet for matches of images.  Looky what I found!  At wikiart.org it says the name of the work is, “Portrait of Nan,” by Grant Wood and is dated 1933.

Update 2:  OMG.  After learning who the artist was and the name of the painting, I dug a little deeper.  The subject in this painting is the same woman who is the subject in one of the most famous American paintings out there, “American Gothic.”  Nan is the artist, Grant Wood’s, sister, and she took a lot of mean comments for how she looked in the first painting.  As an apology, Grant did this one of her.  Read more about Grant and Nan Wood here. 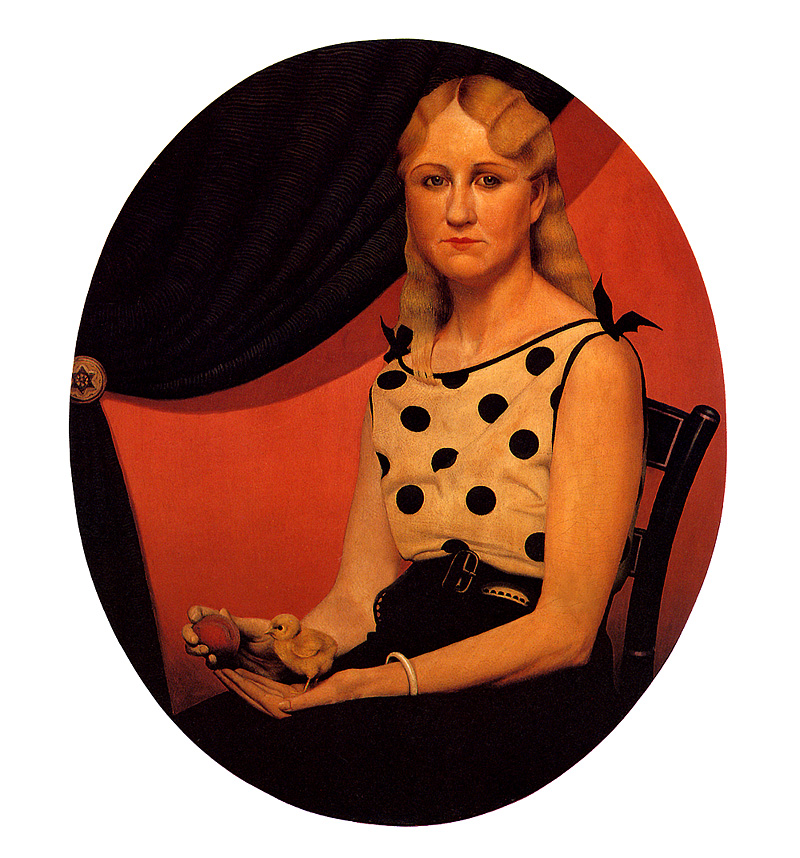 Jerry insisted I take a day off from canning peaches to have Mr. Jonas from Prairie Times come out to do one of those what they call “human interest stories.”

We’ve been farming all of our lives. We grew up on adjoining farms. Our mothers are best friends. Jerry and I have known each other from the beginning.

About ten years after we got married, Jerry’s dad was gored by a cranky boar in mating season. He died of something they call Merza [sic.] My dad passed about a year later in a tractor accident. His ribs were stove in and crushed his heart.

We farm both parcels together now and ended up taking on some help. No, God never graced us with young’ns.

Mr. Jonas asks if he can take my picture holding some of the farm in my hands. I say OK. Then he and Jerry walk out to the John Deere so he can take one of Jerry.

Poached eggs, sourdough toast,
and jam for breakfast –
Sheets dry on the line.

I found this woman’s image in my collage boxes and have written a modified haibun for her.

Mish is today’s host of dVerse‘ Poetics. Mish says:
…Option #2 From your own collection … choose a photo where the eyes speak to you, express an emotion or lure you in. What do you see? What are their eyes saying? What is their story?