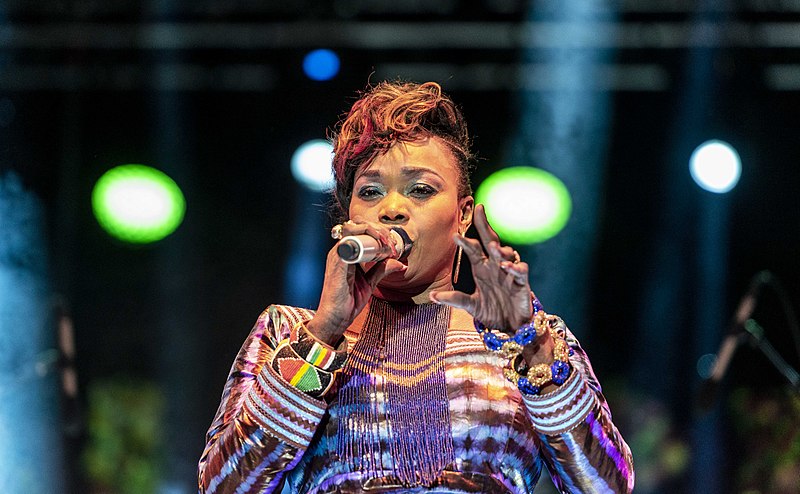 Oumou Sangaré (born 25th February, 1968) is a Grammy Award-winning Malian Wassoulou musician, sometimes referred to as “The Songbird of Wassoulou”. Wassoulou is a historical region south of the Niger River, where the music descends from age-old traditional song, often accompanied by a calabash, which is a musical instrument consisting of a half of a large calabash melon, which is struck with the palms, fingers, wrist or objects to produce a variety of percussive sounds.

Sangaré recorded her first album, Moussoulou (“Women”), with Amadou Ba Guindo, a renowned maestro of Malian music. The album was very successful in Africa, with more than 200,000 copies sold. With the help of Ali Farka Touré, Sangaré signed with the English label World Circuit. At the age of 21, she was already a star.

Oumou Sangaré is considered an ambassador of Wassoulou; her music has been inspired by the music and traditional dances of the region. She writes and composes her songs, which often include social criticism, especially concerning women’s low status in society. Many of Sangaré’s songs concern love and marriage, especially freedom of choice in marriage. She is an advocate for women’s rights, opposing child marriage and polygamy.

Sangaré is featured prominently in Throw Down Your Heart, a 2008 documentary about world-renowned American banjo player Béla Fleck, and his exploration of the relatively unknown relationship between his instrument and the musical traditions in Africa.

One thing to share:
Sangaré is also involved in the world of business, including hotels, agriculture, and automobiles. She has launched a car, the “Oum Sang”, manufactured by a Chinese firm and marketed in conjunction with her own company Gonow Oum Sang. She is the owner of the 30-room Hotel Wassoulou in Mali’s capital, Bamako, a haven for musicians and her own regular performing space.

I helped build the hotel myself. I did it to show women that you can make your life better by working. And many more are working these days, forming co-operatives to make soap or clothes.