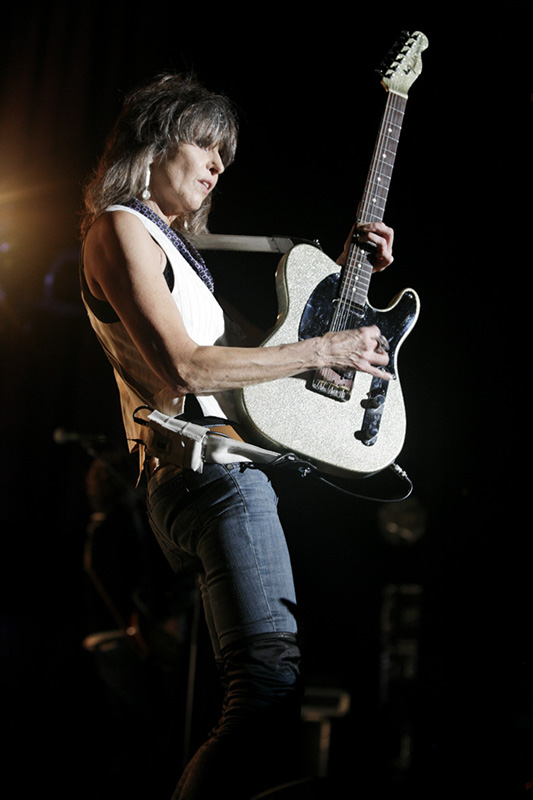 Christine Ellen Hynde (born September 7, 1951) is an American singer-songwriter and musician. She is a founding member and the guitarist, lead vocalist, and primary songwriter of the rock band the Pretenders, as well as its only constant member.

Hynde formed the Pretenders in 1978 with Pete Farndon, James Honeyman-Scott and Martin Chambers. She has also released a number of songs with other musicians including Frank Sinatra, Cher and UB40, and she released the solo album Stockholm in 2014. Hynde was inducted into the Rock and Roll Hall of Fame in 2005 as a member of the Pretenders. She performed at Live Aid in 1985.

Hynde was born in Akron, Ohio, the daughter of a part-time secretary and a Yellow Pages manager. She graduated from Firestone High School in Akron, but stated that:

I was never too interested in high school. I mean, I never went to a dance, I never went out on a date, I never went steady. It became pretty awful for me. Except, of course, I could go see bands, and that was the kick. I used to go to Cleveland just to see any band. So I was in love a lot of the time, but mostly with guys in bands that I had never met. For me, knowing that Brian Jones was out there, and later that Iggy Pop was out there, made it kind of hard for me to get too interested in the guys that were around me. I had, uh, bigger things in mind.

Hynde became interested in hippie counterculture, Eastern mysticism, and vegetarianism. While attending Kent State University’s Art School for three years, she joined a band called Sat. Sun. Mat., which included Mark Mothersbaugh, later of Devo. Hynde was also caught up in the Kent State Massacre on May 4, 1970 in which the boyfriend of one of her friends was among the four victims.

Hynde moved to London in 1973. With her art background, she landed a job in an architectural firm but left after eight months. It was then that she met rock journalist Nick Kent and landed a position at the music magazine, the NME, writing what she subsequently described as “half-baked philosophical drivel and nonsensical tirades.” However, this proved not to last and Hynde later got a job at Malcolm McLaren and Vivienne Westwood’s then-little-known clothing store, SEX. At one point she tried to convince Johnny Rotten and then Sid Vicious (of the Sex Pistols, who were managed by McLaren) to marry her, just in order for her to get a work permit. Hynde’s version of this episode has it that Rotten “offered to go to a registry office with me and do the unmentionable” but when he subsequently pulled out, Vicious volunteered to take his place. Upon arrival at the registry office the following morning, they found it “closed for an extended holiday” and were unable to attend the following day due to Vicious making a court appearance.

Other things to share:
Hynde has a daughter, Natalie, born in 1983, with Ray Davies of the Kinks. She married Jim Kerr, lead singer of the band Simple Minds, in 1984. Together they had a daughter, Yasmin, in 1985. They lived in South Queensferry, Scotland and divorced in 1990; Hynde then married Colombian artist and sculptor Lucho Brieva in 1997. They divorced in 2002.

She follows Vaishnavism, a branch of Hinduism, and travels to India once every year to further her studies.

Hynde lives in London, and also has an apartment in her hometown of Akron.

Hynde has described becoming a vegetarian as “the best thing that ever happened to me.” She says that she came to regard meat-eaters with “distaste, almost contempt” but has learned to “live and associate with [them] but never respected them.” Hynde is also an animal rights activist and a supporter of PETA and the animal rights group Viva!. She also appeared in anti-fur trade organization Respect for Animals’ commercial ‘Fur and Against’ in 2002, alongside Jude Law, Paul McCartney and others.

Hynde published an autobiography, Reckless: My Life as a Pretender, on September 8, 2015.

In October 2018, Hynde released a limited edition book of her artworks, titled Adding The Blue, the name being taken from the penultimate track on her 2014 solo album, Stockholm