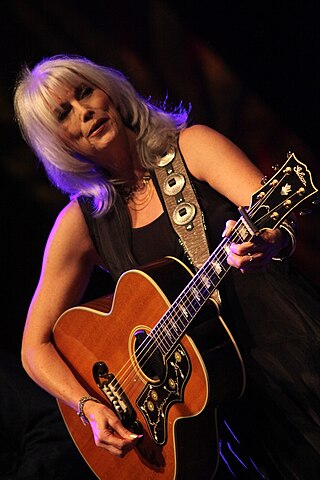 Emmylou Harris (born April 2, 1947) is an American singer, songwriter, and musician. She has released dozens of albums and singles over the course of her career and has won 14 Grammys, the Polar Music Prize, and numerous other honors, including induction into the Country Music Hall of Fame. In 2018, she was presented the Grammy Lifetime Achievement Award.

Harris’ work and recordings include work as a solo artist, a bandleader, an interpreter of other composers’ works, a singer-songwriter, and a backing vocalist and duet partner. She has worked with numerous artists.

Born in Birmingham, Alabama, Harris spent her childhood in North Carolina and Woodbridge, Virginia, where she graduated from Gar-Field Senior High School as class valedictorian. She won a drama scholarship to the UNCG School of Music, Theatre and Dance at the University of North Carolina at Greensboro, where she began to study music, and learn the songs of Pete Seeger, Bob Dylan and Joan Baez on guitar. She dropped out of college to pursue her musical aspirations, and moved to New York City, working as a waitress to support herself while performing folk songs in Greenwich Village coffeehouses during the 1960s folk music boom.

There is so much more to share about Emmylou and I would urge you to follow the wikipedia link to see all of the awards, kudos, collaborations, etc. she has earned and been a part of over the years.

Discography: (just easier to plug this in, which is what I should have been doing all along.)

After learning Emmylou was instrumental in saving the original site of the Grand Ole Opry, she became a hero of mine.