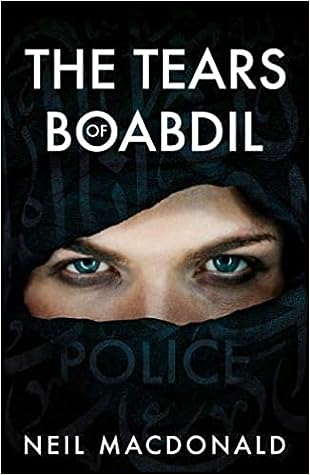 Part of what I will reveal is a lie . Or a story , which is much the same thing , since I’m not sure truth exists . You may think you’ll be able to figure out which bits are untrue , but I should warn you , I’m an excellent liar . Spinning yarns is my business . Even when it’s done with love . Can you love those to whom you lie ? I believe you can because I have . You may think that makes me a bad person . Whether I am the hero or the villain of this tale , you will decide. — Neil MacDonald, from The Tears of Boabdil

The Tears of Boabdil is a tale of espionage and romance. The main characters are Vince, with the cover name Zami; Rashid and Afaq, two brothers and suspected leaders of a British radical religio-political group that may or may not be planning terrorist acts; Ayesha, the sister of the two brothers, very well-educated but working at her parents’ small shop; and Tommy, Zami’s “handler,” sent to keep an eye on him when the reports don’t show up as expected.

The story is not told in a linear manner. Nor is it only the love story of Zami and Ayesha. Interspersed is the story of Boabdil, the last Sultan of Granada, in Spain, who, in 1492, turned the city over to Ferdinand and Isabella, effectively ending the Muslim ruling presence in Spain. It’s done through a pair of fictional characters Zami invents, set back in that time, based on him and Ayesha. What I found clever is how the author paralleled the two trajectories of the characters in different times and places. I feel the book highlights an important piece of history for that part of the world.

There is a lot of terminology from Urdu, the language of Pakistan, where most times you can pick up the meaning by the context. There’s a fair bit about Muslim philosophy. The coverage of the philosophy is non-biased. Further, the author remains neutral on violent actions on both sides of situation. Where the two brothers and their study group at the mosque have committed no known violence but may or may not be plotting it, in contrast there is an organized “group of youth in hoodies emblazoned with the English Cross of St. George” that harass and beat Muslims around town when they see an opportunity.

The prose passages swirling around Zami and Ayesha’s love story are beautiful time and again. One such passage:

She touched him. Softly, on the hand. The wind bowled a plastic bag along the lane, caught it, and swept it on an eddy into the sky.  Aloft, it fluttered white wings, dipping and weaving.  A bird called high and sweet.  The back of Zami’s hand tingled, the imprint of her fingers memorised by his nerves, though her touch had been fleeting.

The main question in The Tears of Boabdil is will Vince, the undercover agent trying to infiltrate a suspected terrorist cell choose duty over the love and loyalty growing between Zami and Ayesha? I rarely read espionage stories or romance novels, but when I read the plot decided to give it a go. I enjoyed the texture and learning about the history of Boabdil, Granada, and Alhambra, the fortress palace there.