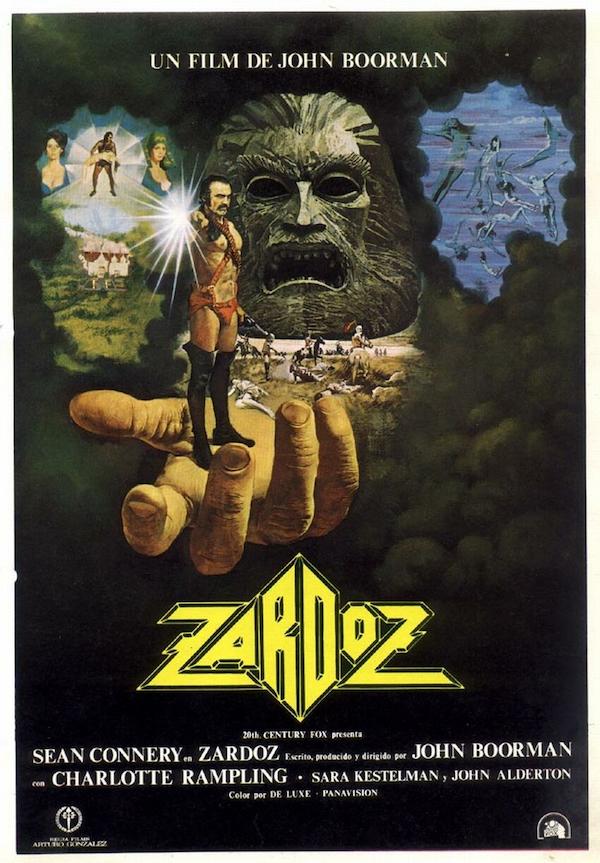 [the gigantic Stone Head hovers before the worshipful horde of Exterminators]
Zardoz: Zardoz speaks to you, His chosen ones.
Exterminators: We are the chosen ones!
Zardoz: You have been raised up from Brutality, to kill the Brutals who multiply, and are legion. To this end, Zardoz your God gave you the gift of the Gun. The Gun is good!
Exterminators: The Gun is good!
Zardoz: The Penis is evil! The Penis shoots Seeds, and makes new Life to poison the Earth with a plague of men, as once it was. But the Gun shoots Death and purifies the Earth of the filth of Brutals. Go forth, and kill! Zardoz has spoken.
–dialogue from, “Zardoz” (from imdb)

Set in the year 2293. Zardoz is a giant flying head that looks like a figure out of a DaVinci painting and speaks with the voice of God. It lands in fields in the “Outlands,” speaking to the Exterminators, an elite sub-section of Brutals, who the peasants. The Exterminators are savage men who are half-dressed and ride horses, rape, and kill. The voice of Zardoz their god, speaks to them as it dispenses a limitless supply of guns and collects the bags of grain from them that the peasants have harvested from their labors.

One of the Brutals, Zed (played by Connery) decides to stowaway inside of the head under the grain. He wants to know where Zardoz – and the grain – goes.

He finds himself in an Eden-like place called the Vortex. The people there are unlike any he’s seen before. They are the Eternals, the keepers of cultural artifacts, have highly evolved intellects that can telepathically communicate with each other. As their name suggests, they are immortals! They’ve become androgynous for the most part, with little conflict, and live simple lives, turning the grain into flour to make bread. They are also bored out of their minds.

When Zed, looking very male and attractive in his red leather outfit that doesn’t cover much, stumbles into their stable, boring lives, he upsets the balance of everything. Half of them want to kill him. Half want to study him. Everyone wants to f*ck him, whether they admit it or not. Although the Eternals regard Zed as a brute and an object and a means of population control, he is much more than any of them imagined.

Although Zed’s character is plain-spoken, the Eternals have become erudite and arrogant over their years of immortality. Their casually cruel comments to and about Zed and to each other show their pettiness and how little wisdom they’ve learned over their long long lives. All of the dialogue of the Eternals is presented in a theatrical way, almost as if they are merely playing their parts in the human story.

The sets are for the most part a countryside estate with outbuildings. There are special effects that were standard at the time that remind me of old Star Trek or Twilight Zone episodes.

What I liked about Zardoz is seeing Sean Connery looking half-dressed and super hot. The rest of the people were androgynous-looking so it made him look all the better. I liked the vision of the director in what he imagined the future would look like if humans were to achieve immortality. I love the analogy found here between the God Zardoz and the Christian God. I found the ending to be perfect.

What did I learn from “Zardoz”? Death is necessary to life, and nobody has a right to cheat death as it upsets the order of the universe.

Warning: there is at least one scene of rape in the movie. There is some killing but very limited graphic violence.