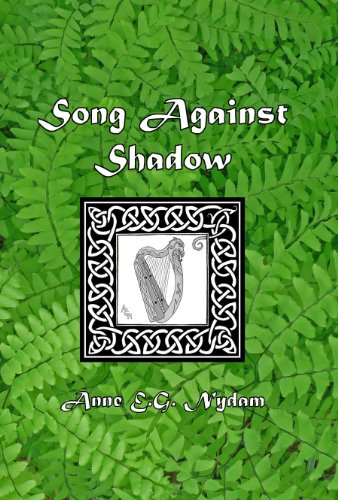 I was first introduced to Anne’s work through April’s A to Z Challenge. I started participating in and reading other participants in 2019. Anne’s blog theme that year was fantastical creatures. What impressed me most about her entries was the research into the beasts with ample illustrations, wood prints whenever possible. Her 2020 theme was nursery rhyme illustrations, where many of the wood prints were Anne’s own creations. This year’s theme was mythical places, again amply researched and illustrated with such beautiful images. To learn more about Anne and to be awestruck at what creative delight that resides at her blog, go here.

It was only this year that I looked a little deeper into her blog site and discovered a bibliography of the books she has written. I decided to take the plunge and buy the first book in her Otherworld Series (Kindle for PC Version.) Her website said that The Otherworld Series is written for age 10 and up, but as a woman in my 60’s I found it both soothing and entertaining to read. The language is simple, yet as it is set in “Otherworld” it has its own geography and terminology and cultural customs that will capture a 10-year-old’s attention. The names of the characters and locations are thoughtful and unique. There is a map in the front of the book which I couldn’t see well in the Kindle edition, but perhaps there is a way to enlarge it through Kindle?

The story begins with the young woman, Svarnil, which means Sage, who has been apprenticed as a bard for several years to Bard Venn. She’s reaching the place in her training where she is to take the “bard test.” The expectation is that once she’s qualified and Venn decides to retire she will take over as bard of her small village. The bard is expected to learn all of the legends of her village and region in order to keep the old stories alive. Svarnil is feeling resistance to the idea of simply following in Venn’s footsteps without stepping out into the world beyond her village.

Almost as if throwing intention to the wind, Aerbremel, one wizard of six in an order called Cumarún, arrives in the village and singles Svarnil out as one who can help him with a “living death” that is swallowing up regions far from there. Aerbremel seems to think Svarnil, with her knowledge of legends and her special traveling harp, can help diagnose what’s going on and effectively fight against it.

So begins the grand adventure of one young woman who has skills she’s been taught but also learns her skills are greater than she ever believed before. Along the way she meets an assortment of the good, the bad, and the ugly. She learns from each. There is much danger, ill-intention, and social inequity she encounters as well as kind souls and various magic-weavers.

The plot is fairly simple and linear with a few flashbacks based on learning from the bard’s legends. There are some acts of violence in the story, but there is very little to no graphic or gratuitous violence in it, which makes it non-traumatizing for the younger reader. The dialogue is good and includes much what I will call “folk wisdom” in it. This is the kind of fairy tale you want young people to read. It shows females as naturally inhabiting positions of responsibility and self-determination as well as using their critical thinking skills that realize their potential and help the world at large in the process.

Some favorite quotes from it:

A bright and terrible hero Ãdun had been , strong in his arms , strong in his mind , strong in his will , and weak , weak as a scorpion in his angry pride , for beneath his brittle shell of warcraft and the flashing sting of his fury was the boneless insecurity of pride .
Page 46 · Location 804

Long , low beasts they were , with the loping stride of wolves , but short black coats and long , out – thrust necks . They moved almost silently across the death – shadowed field . The small heads of the beasts swung incessantly from side to side in a way that reminded Svarnil of serpents , and the bits of their harness were caught between sharp carnivore teeth . The three riders themselves were black blobs on the beasts ‘ backs , until they came down from the low rise . Then Svarnil saw that they were tall people riding crouched and hunched , with their knees sticking out to the sides and their small heads thrust forward like their beasts ‘ . Their skin was so pale it was tinged sickly blue , their thin lips were like bruises across their pasty faces , and their squinted eyes also seemed a colorless blue . The livid skin looked even ghastlier under the lank black hair that lay in flat strings across their heads and grew down their necks like manes .
Page 74 · Location 1289

Beyond the silvery border of the beach was the ocean , vast as the sky and rumbling like constant thunder as it crumpled its edge again and again against the stony shore .
Page 84 · Location 1468

Well , the bards know when to stop a story so it sounds best , but that does not mean that the real story stopped at that point . In truth , real stories never stop at all , as you have reason to know .
Page 156 · Location 2815