Rising from the soil
as Kun rises from water
a green furred dragon.
Brown scales gleam when she rests, as
heaven’s grace flows to and fro.

One of my old co-workers in the juvenile probation officer job ended up leaving and putting his teaching degree to further good use. He worked for some years at an alternative education high school and got the students involved in an annual fundraising plant and craft sale that taught them a lot about entrepreneurship. He and wife, both retired from their day jobs, (although I’ve never seen any two retired people work harder!) now run a very successful perennial plant, shrub, tree nursery from their homes and also have a stall at the farmer’s market.

Before covid, when I routinely visited the farmer’s market I would always stop at their stall to see what goodies they had to offer. One season they had a variety of small larch trees for sale. It was love at first sight. I curbed the impulse to buy any; yet they were put on my bucket list.

Finally getting past the contemplative stage of change – my contemplation stage can be LONG – to the action stage, I started doing a little research on larch trees. I was knock-over astounded to learn that larch trees, although they have the appearance of evergreens with the shape and color of the leaves, they drop their leaves in the fall! To me, a non-scientist tree-lover, I see the larch tree as a missing link between deciduous and evergreens. The realization of just how special larch trees are convinced me to contact my friend and set up an appointment at his and his wife’s place to look at the several varieties of larch to choose from. 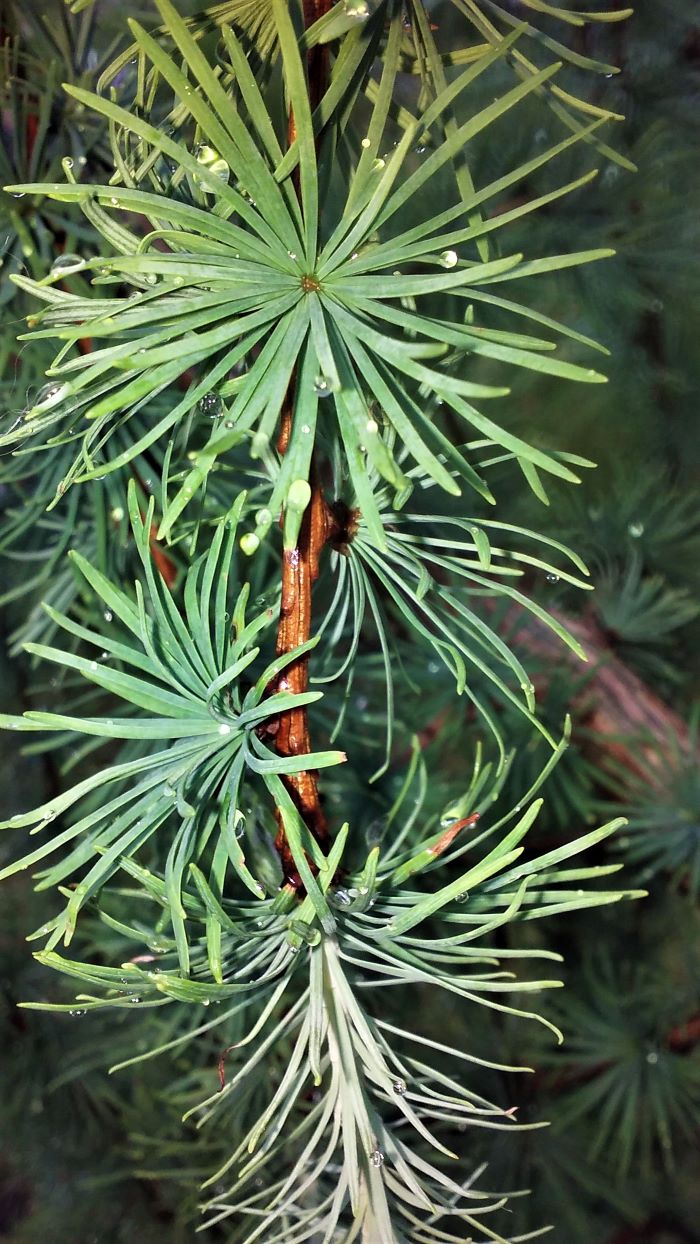 As I got the tour of the what I will call Garden of Eden that is their property, a labor of love for these two as much as anything, we finally got to the larch section. My avid curiosity had me firing questions about larch habits and care faster than my friend could answer. I looked until one “sang to me” as my friend described it. He said when you choose like that, with a connection, it makes the tree feel loved and it grows better. I have no reason to doubt it. We managed to lay down the back seats of the car, maneuver it in, and get the trunk door shut. (Getting it out solo was another matter!) It’s between 5′-6′ tall. Close inspection reveals a trunk texture that inspires poetry.

Going out to old faithful, the internet, I found some of the specifics on the variety I chose.

Conifer Society says:
Larix decidua ‘Pendula’ bears luminous, fresh, green foliage that covers this fast-growing weeping tree in the spring. In the fall, there is a glow of yellow before the needles drop to reveal tawny-brown twigs. This plant can take on a multitude of forms depending on how it is trained and staked. Terminal branches will push up to 12 inches (30 cm) each year, creating with time, an imposing specimen in the landscape. This is an extremely old cultivar in the nursery trade, likely first described in botanical literature as early as 1836, perhaps 1789, leading one to believe that multiple clones likely exist.

Wisconsin’s Horticultural Extension says:
The larches (Larix spp.) are unusual conifers, in that they are deciduous and drop all their leaves each autumn, unlike their evergreen cousins. They are among the earliest trees to come into leaf in spring, with leaves on both short shoots (spurs) and long shoots. Clusters of leaves arise from each spur. The needle-like leaves are usually vivid green, sometimes blue-green in summer and turn butter yellow to old gold in autumn. Upright, summer-ripening cones are borne on the shorter shoots and remain on the tree for some time. In older trees, the branches tend to droop in a graceful manner. Larches are adaptable to most soils, though wet soils are best avoided for most species. All need full sun, and are readily transplanted when dormant. Species hybridize readily, in the wild and in cultivation. They propagate readily from seed.

Larix occurs in boreal circumpolar lowlands in Alaska, Canada and Russia, and at moderate to high altitudes in the mountains of North America, northern Europe, and over much of Asia from Siberia as far south as northern Myanmar. There are about 11 species (there is some debate about the Asian ones). The most commonly available larch for landscaping is the European larch and its hybrids.

The European larch, Larix decidua (= europaea), is hardy to zone 2. In its native range in the Alps and Caucasian mountains, it forms extensive forests at high altitudes. It has also naturalized in other parts of northern Europe on moist soils in temperate regions. This tree was important in European folklore, being traditionally considered to prevent enchantment and ward off evil spirits – infant children sometimes wore collars of larch bark as protection against the evil eye. Various preparations of larch were also used for medicinal purposes.  A brown dye was also obtained from the needles in autumn.

On the North American continent European larch is most commonly planted in southeastern Canada and the northeastern United States, where it makes a great ornamental tree. Young trees establish very quickly and grow vigorously, putting on 12 to 18 inches of growth annually. European larch does best with sufficient moisture, well-drained and sunny conditions; it does not grow well in very dry or wet soils. One cultivar of the European larch is ‘Pendula,’ a small version of the original that weeps down to the ground.