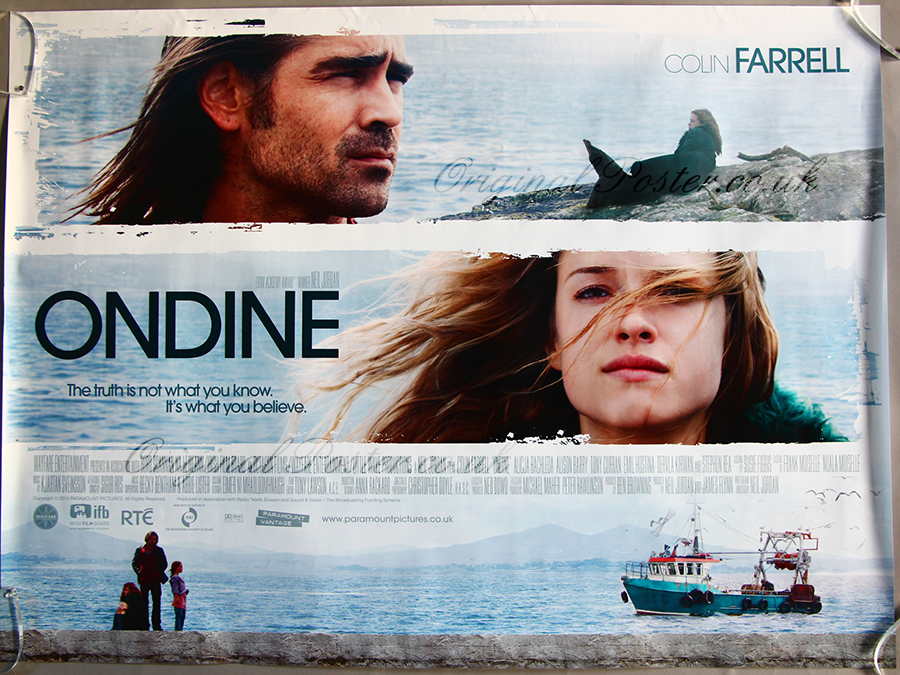 And here we are, getting close to wrapping up Hanspostcard’s 12-week movie draft. It has been a real pleasure getting immersed in writing up reviews on some of my very favorite movies. Hans set it up well with the genres. It’s also been a big pleasure reading everyone else’s reviews and learning about their favorite films. It’s clear that we’re all a bunch of cinemaphiles!

Foreign films are neck and neck with indy films as my favorite genres. As you know, almost half of my other genre choices (Nausicaa, Honeyland, The Proposition, The Final Master, Zardoz) were also foreign films. Today’s choice makes it an even 50/50. I did a short review for “Movies, Movies, Movies!” on “Ondine” already; much of this is a rehash.

Genre: foreign (for draft pick) also a drama and a romance

The plot: Farrell plays Syracuse (nickname Circus, as in clown, as in laughingstock) is a recovering alcoholic fisherman who hasn’t had much luck catching fish – until he finds a woman, Ondine (played by Bachleda,) in his net. Or is she a selkie who has lost her seal coat? The mystery unfolds over the course of the movie. Syracuse has a wee daughter, Annie (played by Barry,) with kidney failure who rides around in a wheelchair because she’s so weak from dialysis as she waits for a kidney donor match. Syracuse also has an ex-wife, Maura (played by Kirwan,) who continues to drink with her boyfriend/husband, Alex (played by Curran.) Throw in an ascerbic priest, Priest (played by Rea,) and you’ve got yourself a fine movie.

Things I liked about “Ondine,”: The cinematography is breathtaking. The little cottage in the cove is on my bucket list. The mystery of the selkie is used to great effect here. Annie is simply adorable for her plain-spoken style. Syracuse is gorgeous with his long hair and vulnerable manner. Ondine gets plenty of cheesecake opportunities. Great to see a movie set all around and in the water. I love the gentle way the plot plays itself out. I like the loving connection between Syracuse and Annie and how Ondine falls into place with them. I like the scenes between Syracuse and the Priest, who feels almost like a magical being.

Themes: I see a man who has been a village laughingstock because of his falling down drunkenness for years who decides to pull his act together because his young daughter needs him. I see where his choice to live a clean, recovering lifestyle has effectively isolated him, as his old lifestyle connections continue to party. Finding the woman in the net feels like a sign to him that things will take a turn for the better. I also see redemption for both Syracuse and Ondine.

Soundtrack: there is a good mix of modern and traditional music on it. To see the track listing go here.

What did I learn from the movie? Do the right thing because it’s the right thing to do. No other reason is needed. Even the most hopeless situations can suddenly turn without advance notice. Prayers do get answered; maybe not all of them, but enough.

This review also appears on hanspostcard.